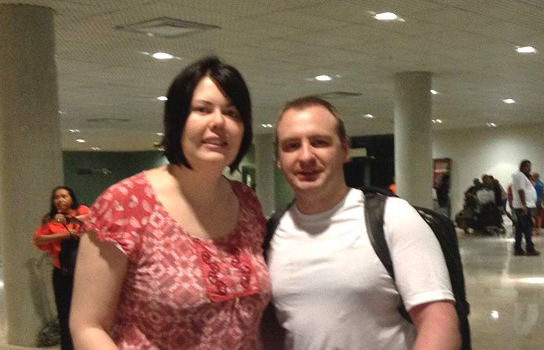 A one hour flight from Dublin to London was followed by an over-night stay in Heathrow airport. The next morning they flew from Heathrow to Miami. Unfortunately in Miami, the Customs and Border Protection officers decided they wanted to enjoy Tim and Lynsey’s company for a little bit and kept them waiting for three and a half hours. This meant that Tim and Lynsey missed their connecting flight, and so their detour began.
The airline re-routed them via Sao Paulo, which was an eight hour flight (not including the one-and-a-half hour delay on the ground whilst they located a missing co-pilot), to the south of Brazil. Having flown four hours further than intended, Tim and Lynsey had to get off the plane and head straight back. Upon arrival, they were informed that their connecting flight was ‘cancelled’ and they wouldn’t be flying for another twelve hours). They later found out their cancelled flight was simply overbooked and they were bumped off it.
So after almost an hour’s drive from the airport, they had a few hours in a hotel to rest and then return to the airport to catch their final four hour flight from Sao Paulo to Manaus. When they arrived in Manaus a day later than expected, Tim and Lynsey collected their entire luggage (which was all intact) and were greeted by Victor and Audrey Maxwell, who had flown over the week before to make preparations for their arrival. Pastor José and his wife Eurides were also there to greet them, along with Mario who took them in his well-equipped jeep to meet his wife Wilma, at the beautiful home they will be hosting Tim and Lynsey in for the foreseeable future. After sixty-three hours “on the road” they were finally able to collapse into bed.