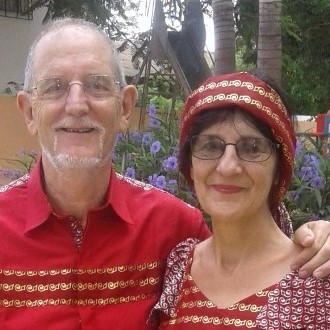 It is amazing how this literacy course is coming together. What would normally have taken over a year is now being done in three weeks! NTM’s international literacy consultants brought a very powerful software programme that is still being developed. Before they arrived, Steve and Moira had emailed them a lot of Baynunk written material containing over 17,000 words which they entered into the software programme. The programme has sorted out all the words, figuring out the syllable patterns. Each day it tells them what words they can use for each lesson in the reading primer they are working on. They can see what words they can use for each story on each page and with their great Baynunk helpers can figure out what short stories to put together.

The literacy consultants work closely with them, putting the pictures they need onto each page of the primer. The speed at which they are getting the course together is incredible and due to the expertise of the consultants.

After only three days and with the brilliant and creative input of their Baynunk helpers they have completed the first primer including a simple ‘reader’ composed of four short stories. The first primer was the hardest to put together as they only had a very limited set of words to work with. The other primers should come together even faster.

The other teams are also making really good progress. Pray that the literacy workshop continues to go well and that their language helpers’ time with them there would have a positive impact on both of them spiritually.

Steve and Moira plan to take the boat back to their house in the south later this month.

Meanwhile hundreds of Baynunk are listening to Bible teaching on memory cards. Would you please ask the Lord to speak powerfully to them?

Steve and Moira are truly grateful for your faithful prayers.