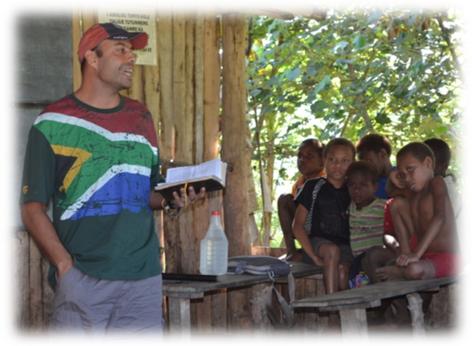 Two years ago, one of these co-workers went to visit a village some distance away. A man in that village had heard some Bible teaching from the first outreach. He was excited and anxious for his own family to be able to hear. He said to this co-worker, “Look over there—that’s my wife. Look over there—those are my kids and that’s my family over there. If they die and go to the place of fire, whose fault it? It’s your fault because you heard the Good News ten years ago and haven’t come and told us yet.”

Because Edward has been the main Bible teacher in the village where the missionaries first taught, it took some time before he was freed up and able to go. However, last October, he and his wife and their three young children moved to this distant village to begin their new ministry. As soon as they arrived people wanted them to start teaching, that same night! So a couple of days later, he began to teach and taught seven days a week for thirteen weeks! Absolutely incredible! Even his little daughters got in on the action, helping to explain the Bible story posters casually to different people!

The Bible teaching culminated on Christmas Day and in the end, 34 people placed their trust in Christ. Several others have heard the teaching and need a bit more review, but the Lord is certainly at work in their hearts.

Throughout this time this dear man continually had people waking him up early each morning, wanting to talk about the Lord! The villagers provided food each day for his wife so that she would not have to plant a garden.

That kind of thing is nearly unheard of in this culture, as people always want payment for their “free gifts”.

Now another group of at least 30 people are anxious to hear the Bible teaching. He will soon be starting back at the first lesson and teaching a whole new group. At the same time, he’ll be going through Acts with the new believers and grounding them in their faith. At the same time, the other co-worker is starting to train and disciple some believers to assist him in teaching the new groups later on. An incredible and exhausting schedule, to say the least.

At the same time, he is also teaching literacy to a large group of students.

Pray for these two Mengen co-workers and their families and for the people in the village.

Also pray for Rebecca Preheim who was diagnosed last year with Multiple Sclerosis. She is excited and anxious to get back to PNG and continue working on Bible translation. Rebecca has 2200 verses ready to go (most of those being from the Gospels of Matthew and John!) She can’t wait to sit down with her Mengen friends and continue on the translation process.