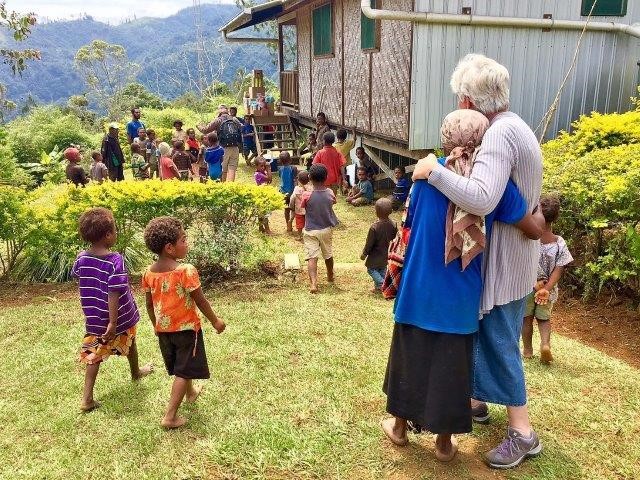 Paul and Susan recently were able to make another short trip to PNG to support, encourage and help the Gende believers.

There was much to encourage Paul and Susan too. Four young men were baptised as well as an old lady. The young men have attended the Bible teaching since they were small boys when the Gospel was first shared in the village. They responded some years ago to the message. Paul and Susan have discipled them and so it was a joy for Paul to be able to baptise them along with the old lady.

Paul was able to teach one young man every afternoon (he has been coming to meetings on and off for a few years). He was not clear on the Gospel but by the end of ‘Creation to Christ’ lessons he gave a clear testimony of trusting in Christ alone for salvation.

A believer in the next village had been faithfully teaching two relatives in the evenings. When Susan chatted with them, they also had understood clearly and were expressing joy at all they heard and were trusting in the Saviour. Pray for their ongoing discipleship and maturing in the faith.

Many others are requesting to be taught in other villages including eight teenage boys. Praise the Lord. Pray for all the efforts to share the good news by those that have come to know Christ in the next village by the believers to their own people.

Some came back to the Lord during Paul and Susan’s recent visit. Two because of the testimony of those baptised. One was the father of one of the young men!

Susan had hoped to get more work done on translation but there were few to help. 1 Thessalonians had a couple of checks and some work on other books is ongoing.

There is a need for mature believers and men who can be appointed as elders.

Some who seemed to be doing well last year were nowhere to be seen this visit, which is deeply saddening to Paul and Susan and they would appreciate prayer about it.

Paul and Susan had hoped to get longer term insurance fairly soon and return to PNG but family members’ health is of concern right now.

Continue to pray for the believers and all that is going on for the Lord. Some faithful believers are facing trials one after another.