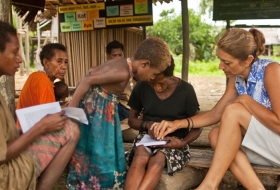 Lisa Kappeler is a translation consultant in Papua New Guinea as well as serving among the Uriay people. Recently she thought she would not be able to leave the Uriay village for a while but then she was able to get a flight out to the city to check the clarity of another translator’s books of Luke and Acts.

Luke is a long book….over 1000 verses. Acts is a long book as well but they only had to check about half of it. The checks went well and she finished that last week. Now she is gearing up for another check that will take place next month in a remote location. This language group is in the middle of hearing the foundational Bible teaching right now. Lisa feels honoured to be able to help them with their translation project – and perhaps get to sit in on one of their lessons.

Lisa has had three other translators ask for checks of their projects too – so she is not sure when she will take her consultant hat off.

Lisa continues to draft new books and write back translations in between preparing for the translation checks. Some days it is a tug of war in her heart. Her last translation session in the Uriay village was a precious one. One of the men who used to help her when she first started translating, who has not helped her for years because of pressing village responsibilities, committed to two days of recording new material! At one point they decided to talk through some portions out of Isaiah, and as she started reading through the chapter 53, they both had tears in their eyes. As they talked about who Christ is and how He was sinless and yet died for their sins, he was wiping tears out of his eyes – and sharing a very clear understanding of what Christ did on the cross. It was a precious moment of worship and praise! What a gift from the Lord to see this man so moved by the Word! Another man who was present was impacted. Lisa loves her job! She loves how His Word comes alive and pierces hearts and minds!

In addition to the man stepping back in, Lisa had new people coming to help with translation. A group of teenage boys that were kids when she first moved into the village kept returning to help! Others have been willing to help in past years but it seems like they feel responsible for it now. They were recruiting new people to help so that they could be done faster. Lisa has prayed for this for years – that she would not be the one pulling them along, but that they would feel responsible for it – and God is doing it!

There is never a lack of work. God allows Lisa the privilege of helping others with their translation projects, alphabets and language analysis. She does not begrudge that as she had that same kind of help along the way and the Uriay translation has to be checked by a consultant as well. She knows the role is necessary and she is thankful to be a part of it all. Pray for time to work on the Uriay translation as well. Thank you for praying with Lisa, rejoicing with her and trusting Him to complete that which He started in the hearts and lives of the Uriay! She could not do this work without prayer; God is faithful!