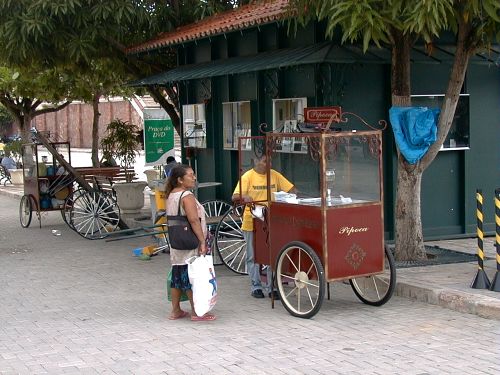 Barbara is currently living in the house of missionaries that are on home assignment with two and sharing it girls from the USA. The house is just outside the mission’s property. Although the road outside this house was supposed to be paved a few times, it has never happened, and so the biggest challenge is to get over the muddy road to the training centre.
In Brazil, summer has started, but that doesn’t mean it is hot. It only means it rains a lot; therefore, the road is muddy.
Barbara has begun Portuguese language lessons. At first she was not allowed to speak, even though she already knew some Portuguese from her previous time in Brazil. After having done the lessons about pronunciation; however, she got permission to use the vocabulary she already knew, which was great news! But she had to promise that she will do a lot of listening too.
In some ways Barbara finds that it is an advantage to know German. In Portuguese, the article and also adjectives and numbers etc., change depending on the gender of the noun, which is the same as she is used to doing in German. Language students have an appointed language helper for two lessons a week. Unfortunately Barbara’s helper was away until after Christmas, so Barbara has been taking the opportunities as they come to study more culture and language. At the same time she is studying American culture and language. Isn’t that confusing? Sometimes she needs to remind her colleagues that English is not her first language. Barbara is thankful for the three years she spent in England.
This month there will be the field conference on campus. All missionaries from the East Brazil field will get together, so Barbara will get to know some of them and their works. She is looking forward to this time and hopes to understand more Portuguese, which will also enable her to talk to more of the missionaries.
Barbara is very grateful for prayer, especially as she is trying to adapt to all kinds of new things.