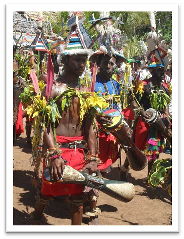 The rain can pour down hard for days on end without letting up at all. The gardens that Ben and Wina planted behind their house are almost completely under water and only the tip of the fence is above water. A little way behind their garden, the flood is up to a man’s neck, so either you swim or find a raft or canoe or you walk around.
As the village is in a valley between two mountains, the water gathers nearby and flows as a strong waterfall down towards the ocean. Although they are a couple of hundred meters above sea level, in some houses warm water came up out of the ground during the heavy rain. It is thought that this has something to do with the volcano of the past.
The wind and rain are sometimes so strong that you might think the roof could blow off. Several of the leaf roofs in the village were damaged and at least two of the cook houses flattened. Also, quite a few of the cassava plants (garden food) on the side of the mountain were blown over by the wind.
Pray for the people on Bali. Several houses were damaged and probably about twenty gardens in their village. The only other time it flooded this badly was in 2010, but that year it was near to the end of rainy season. This year it is at the beginning of rainy season! Apparently in 2010 the Provincial Disaster Relief office did not send any aid because they did not have any “proof” with their report/application (photos). This time Benjamin went around with the men and took many pictures of the damage to send to the office along with a report in hope of a more favourable response this time.
Pray the people would all have enough food in their gardens and that they could keep themselves warm at night when it’s raining. Pray for the missionary team. Sometimes it’s hard for them to sleep and it isn’t exactly motivating for language learning. Pray that they would be an encouragement to the people and that they would find ways to be a help to them.
Ben and Wina are thankful to the Lord that they aren’t alone. The Martins are with them and it’s a blessing to be able to talk with them and encourage each other. They recently taught their children the Biblical account of Noah and the worldwide flood. God made the rainbow as a sign of His promise never again to destroy the whole earth with a flood. What a timely lesson!
Ben and Wina’s co-worker Stephen Martin’s main language helper died very suddenly after taking a severe allergic reaction to crab meat. Stephen and Ben took him to the haus sik, watched him pass away and brought him back home. Later they made his coffin. What a memory. Pray for them as they come to terms with all of this.
For nearly three weeks they were unable to send/receive emails due to the poor connection which can cause them to feel isolated. Pray for safety when they travel on dangerous seas to the mainland.