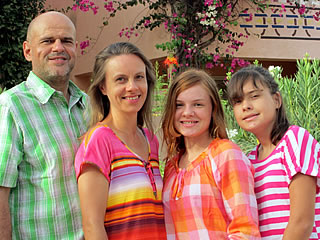 Praise the Lord that they found a language helper so that Badianes could get started with language and culture study. Anne gave them the necessary orientation and coached them for several days. Badianes are excited about their first steps in learning Diola Kerak. Continue to pray for everyone involved: for Badianes that they stay encouraged and motivated, for their language helper and her very special task of “nurturing” them into the world of the Diola people, and also for the nanny and her relationship with the kids.
Pray for Christoph and Anne’s trip to the village this month. They are going to continue to work with the Badianes and their language study. They would also like to check the developed alphabet with some of their Diola friends. It will be a time of closure for the present as well.
While they were in the village they were encouraged to see that the people who were regular at church are still attending and that others attend too. Pray that the believers would grow strong in their faith and would make good choices in their lives. Also pray for those who are interested in the Gospel that they would step out in faith and truly trust the Lord for their salvation. Christoph and Anne are thankful for two young ladies from the church who volunteered to help with the kids’ club. Pray for the kids from the village that they be regular at the kids club and/or church and that they come to know the Lord from an early age.
Pray for a language learning workshop that Christoph and Anne will be involved in at the end of June. Pray for a good time of fellowship and learning, for everything that needs to be organised and that the participating missionaries will gain a better idea and new motivation for their language and culture study.
Pray for Simona and Leonie during their last half term at school, for a good time of closure and also for the transition to Germany. They are especially nervous about going to new schools.
Thank the Lord with them that Anne’s parents found an apartment which they can rent in July, also that they were able to talk with the mission in Germany about their future tasks.