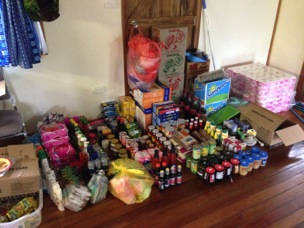 Marie thought “Saying goodbye won’t be so hard…haven’t we done this so many times before?” But that’s life for a missionary; some things just don’t get easier. Even though it hurts they cried because they love and feel loved. They cried because of relief…it was one of the hardest years of their lives. They cried because they have memories of time with family and friends and because of the amazing new friends and Christian family they found. Even though their lives were once again packed into six bags, they got onto the plane as people who are blessed beyond that which words can fully express.
Lourens recently returned from a quick visit to go and see some of their friends in the Mengen. He was so amazed to see how GOD is building his church. This week Lourens is in another part of PNG for some leadership meetings. Marie started supply buying; getting enough supplies for the next four months that awaits them in the bush. Pray for wisdom in planning for the next four months Lord willing they will fly in to Mengen next week. Pray for Lourens as he evaluates the churches planted amongst the Mengen people and plans the scope of his work for the next season.
The children are all doing great and were welcomed by about a dozen of their old friends. They are working hard in school as they had too many days off with “last” things in South Africa.
Pray for the Lauretis as they are getting used to the heat, almost all of the kids have one or other rash. Pray for their health in general, Liam already had two infected sores (insect bites that became infected).
Lourens and Marie thank God for bringing them this far! They feel so privileged to be part of the team reaching the Mengen people.