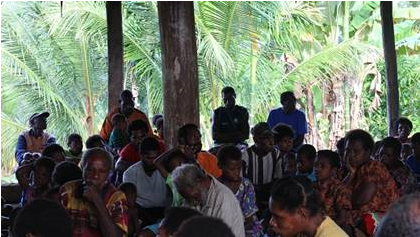 “I do not Fear Death Anymore!” was one elderly man’s response to the Gospel presentation last year. This man grew up understanding from his local religious leaders that he had to earn his way to heaven, and was taught by his parents that he also needed to continue to worship and appease the spirits. In 2014, when the missionary team moved into the area, his family sent him to their village to live so that he could hear the good news ASAP.

He was a good friend to Jason who regularly sat with him during his language study time, when the man would frequently talk about fear of spirits and his overwhelming fear of death. The team began praying for the health of people like this man, that God would sustain them until they could hear the entirety of the Creation to Christ teaching. When the teaching started, he was one of the first ones there every morning making sure he could get a good spot right up front. After those four months of teaching, he repeatedly expressed his joy saying things like, “Now I know that Jesus paid for MY sins and now I’m a child of God. I do not fear death anymore; I will die and be with God.”

Before Jason, Nisae and family went on home assignment, this man was becoming weaker. When they got back into the tribe after their time in America this man’s condition worsened and he could hardly talk, but he continued to try his best to come to the teaching.
One afternoon they got word that he had died. The first death of a believer in the church. His daughter (also a believer) said, “This is not a sad thing, I know that he is with God now.”

Traditionally, after a death, the villagers would stay up all night out of fear that if they did not show a deep enough level of sorrow that the spirit would retaliate against them. That evening the believers came to Jason and told him that this was a time to praise God for saving the man and that they planned on staying up and singing praise songs instead.

During the night and the following day, the believers sat around and reminisced about what they used to think about death. At the burial, even the man’s unbelieving family who came from far away could see that this burial was different, and they expressed joy knowing that their grandfather had heard and believed the message of the ‘Saving Man’.

Thank you for your continued prayers.