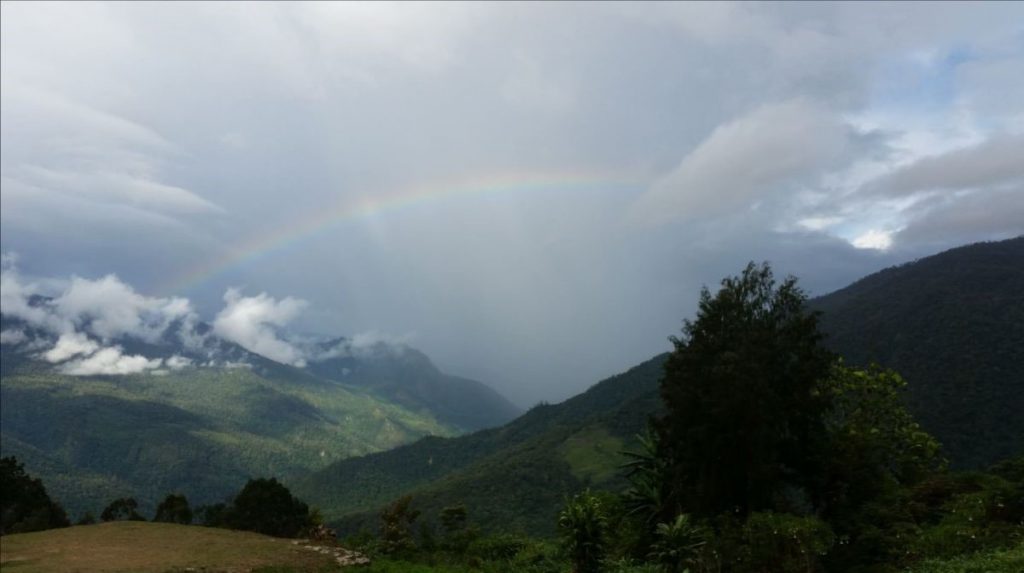 The rainbow is God’s creation. For Karin, the appearance of a rainbow is awesome. It reminds her of God’s faithfulness. However, God says something more important: “I will see it and remember the everlasting covenant …” The Lord Himself wants to remember His covenant of mercy with the earth!

The people that she works with in Asia-Pacific have another explanation: when the rainbow appears in the clouds, it is a sign that Satan is visiting them and is standing with his two feet on the earth – a reason to be afraid of the rainbow. Karin and her co-workers are grateful to the Lord for being able to move into the village and people group, for His faithfulness and help in every single detail. The tribal people welcomed them and the young people were especially helpful.

Karin’s co-worker set up her solar system and she even has hot water, for which she is very thankful. At 1800m altitude, the nights are cold.

Almost all of the tribes in the area around  the people group they are working among already have a Bible translation or parts of the Bible in their own language. Evangelists from the neighbouring tribe visited in the past and preached with translators. Some churches even singing in the neighbouring language. When asked the reason they sing in that language, they said it was because they cannot write in their own language yet.

The spiritual need in the village seems to be huge.

Although the team have only been in the tribe a short time, they have become aware of the big medical need of the people. They can already hear many differences of the dialect to the main village. That will give them a lot of extra work in the future and they will need a lot of prayer support.