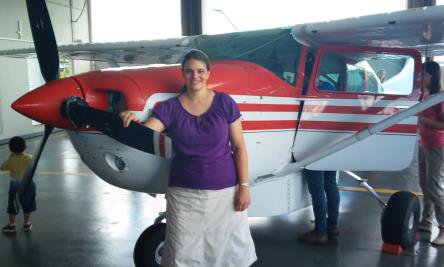 Barbara’s first few weeks in Brazil were rather quiet, but God knew that she was in need of some rest. In January many missionaries from the eastern sector arrived for a conference. It was a great opportunity for Barbara to get to know some of them and to listen to the Brazilian language. She was so grateful that she could already understand a lot and did not have to start from zero. It only took a short time until Barbara was also able to speak.
In February, as one of the single NCLA girls, Barbara moved to the mission´s property and they now live next door to the mission students. It has been great for Barbara and the other girls to spend time with the students and get to know them. Sometimes Barbara joined them in class or work detail and they were very helpful in her language and culture learning process. In June Barbara had to say goodbye to some of her friends who graduated and are now getting ready to move to the place or people group where God has called them to work.
NTM Brazil was given an aeroplane. It took years to fix it up, transport it and get the paperwork done. In August it eventually reached its destiny in Cruzeiro do Sul, AM. It will be a huge help for the missionaries who work in Acre and the western Amazonas. NTM has a mechanic, but the pilot is still in training. Another mission is helping out until he completes his training.
There is a great lack of missionaries in Brazil and at times Barbara was quite frustrated when she saw all the obstacles which seem to hinder the work. In June some of NTM Brazil’s leaders came to talk to those doing NCLA and the mission students about their future. That was a very stressful time for Barbara because she wanted to know where to serve right away and was afraid of making wrong decisions, but she was able to see how much the leaders care about and pray for them. In July Barbara had the chance to have some more conversations and discovered how little she trusted the Lord to guide her to the right place. There will always be difficult situations, but God wants to use those to teach us more about Himself and He promised to be with us.
One of the places where Barbara could work is the Yanomami tribe (Novo Demini) but there would have to be another single girl who would want to go with her. Another option is to work with the Hixkaryana. There is currently only one single missionary working there. They do have a church but need much more teaching. Currently, some of the leaders are there to help with the teaching (in Portuguese with translation). For Barbara to be able to join the team there would need to be a couple that goes with her.
It took Barbara quite a while to accept that there are currently no new works but mostly old works that seem to never get finished. God knows the right place and He will show it to her at the right time.
About two weeks ago Barbara had her final language evaluation and by God`s grace she was able to reach the required level (capable mid). This coming week she will be joining the mission students in jungle camp for two and a half weeks. Just a week after that she will be moving to Manaus where Barbara will have to renew her temporary visa. There will also be time to get to know her colleagues and leaders in Manaus, to help out with different things and to hear more about the works and needs in the western sector. Barbara would like to visit a tribal work to see what it is like and how she could fit in. In January there will be another conference and by that time Barbara hopes to know more about her future work.