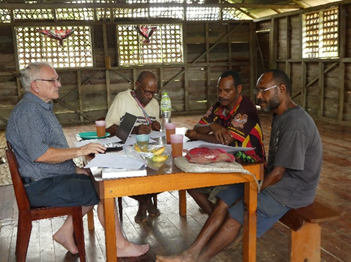 Jack and Isa arrived on time, and with their luggage, so now they need a little time to adjust to the time zone change and the temperature change! They are so thankful that they were able to make this trip and that it went so well.

Jack was able to check his teaching notes on “The Return of the King” and to check further Old Testament Scriptures. He was also able to make up booklets in the Pawaian language so that the messages could be remembered and repeated long after they have left the village.

Isa was kept busy giving clothes and reading glasses to those who needed them. Each person was very grateful for this kind of help.
One young lady said that her mother had told her that Isa had saved her life. It turned out to be that this lady was born during one of the breech deliveries that Isa had managed out in the jungle one night – another cause for gratitude!

The teaching sessions were well attended and the response was encouraging. There were endless expressions of thanks, especially for telling them about Jesus so that they can go to heaven. They repeatedly told Jack and Isa that their work has borne fruit and that there is a ‘present’ (reward) waiting for them in heaven. It was all very embarrassing and they had to tell them that their rewards are also awaiting them in heaven. They sent Jack and Isa off with the Pawaian Salute, as they call it – hands raised to heaven where the believers expect to meet again one day.

Jack and Isa appreciate all their friends that the Lord has raised up and blessed them with, and that includes you. May all our lives be expressions of gratitude for all that God has done for us in sending his Son to bear our sin.

Pray for them as they make plans to go to Norway later this month for a conference and meetings  They have been a few times but mostly in the summer so the winter season will be different and very cold for them. Jack and Isa want to be a blessing so pray for them and for the health and strength to keep going.