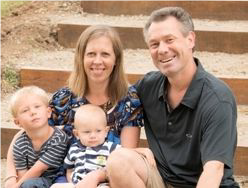 They had also planned to take a break in NTM PNG main centre after the evaluation and thankfully this was still possible even though they left home a week later. They thoroughly enjoyed the break and by the end of it felt emotionally and spiritually ready to return to the village. But … they couldn’t return until a week later as some people blocked the Highlands Highway for ten days.

Once back and unpacked they jumped straight into their daily schedule and tasks. Gerolf is fully into CLA again. He’s having sessions with his CLA helpers and practicing his language skills while being out of the house. He is encouraged with his progress and is looking forward to the CLA evaluation to see exactly where he is at.
Pray for the Dom believers to come back to fellowship with the Lord and each other after being distracted by the elections. Also pray for the construction of a new building for church meetings to happen soon.

Mailis has started home schooling Richard who turned five in July. They are following an American school system and he has started with Kindergarten (the first compulsory year of school). They are thankful that a video course is available for teaching him, so Mailis’ role is to assist him, rather than teach everything by herself. Christian is doing great – his mostly smiley face and typical two-year old eagerness to learn all about the world around him brightens their days!

A short time ago, one of the faithful Bible teachers was diagnosed with oral cancer. Humanly speaking it is very hard to understand why God would let that happen to a man who is greatly used by Him in the community. Pray for his health, and that his situation would bring glory to God. He has been teaching Religious Education in the local elementary school. While representatives from all different denominations here are expected to teach the kids of their “group” once a week he is the only one who is doing it, so he gets to teach all of the kids. Recently he taught them about the death and resurrection of Jesus Christ. Pray that the children would put their trust in the only Saviour!

Recently Gerolf and Mailis with Richard and Christian travelled to Goroka for the annual conference. They enjoyed the Bible teaching, reports from other missionaries, fellowship and fun!
One of NTM Germany’s leaders Heiko Hagemann and his wife Barbara will be in PNG for about two weeks and they have chosen to visit Gerolf and Mailis in the Dom. They are totally excited and thankful for that!

Lots has been happening in PNG and there has been plenty of uncertainty during the past months. In the midst of it all Gerolf and Mailis and co-workers Jim and Judy Burdett have experienced the Lord’s peace and guidance at every step. He is faithful!