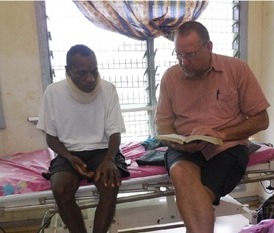 Jan and Annette look back to a very nice, restful time in the Netherlands enjoying their four grandchildren and meeting the fifth. Now they are ready to start work again. They need a lot of wisdom to understand what the Lord has for them. They want to follow Him on the path that He has for them.
They spent their first day unpacking and visiting with some of their co-workers at Hoskins who popped in to welcome them back.
As the day drew to a close, they caught their first mouse. They found water and mould damage, as the rainy season has already been going on for months. But things were cleaned very well and ready for them to move back into the house.
Jan and Annette are starting to look at plans for the work that needs to be done. They are looking at the upcoming annual conference, the small team left on centre and the needs in the area of literacy and the independent churches.
Recently Jan and Annette were able to visit with the Lamogai leader who fell off his roof and who is still in the hospital in the city.
They also heard about a landslide near the city that took down the houses of two Lamogai people. Many had to be dug out of the mud, including three small children from one family, who were completely covered under the debris and mud. They are praising God that no one lost his life in this landslide.