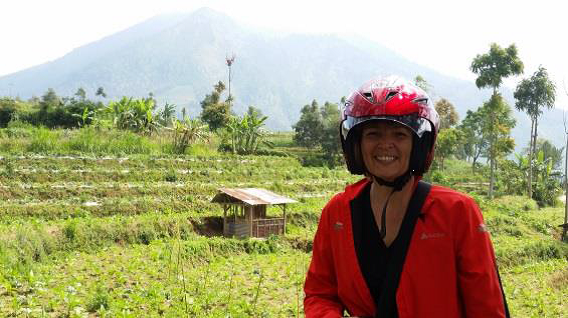 At the end of July Karin’s friend Hanna who she met whilst training at North Cotes College, arrived on the field to begin her language and culture study. Now they share the same house. Karin has had a lot of opportunities to get to know the local culture. More and more the neighbouring families let Karin and Hanna be a part of their community and invite them to their feasts. Recently, their neighbours invited them to a circumcision feast and a wedding.
Karin is now confident in riding her motorbike up the volcano mountain to church by herself. On the way, being able to admire the clear early morning sun surrounded by the big mountains is a worship service itself.
On Tuesday nights Karin attends a Bible study and because she is now acclimatised she takes her blanket with her in the car. In the dry season in the mountain regions it can get quite cold at night and because the people don’t own a lot of warm clothes they take their blankets along.
Karin is thankful that God is keeping doors open in Asia-Pacific and also for health and peace in Him.
A change in the visa process has meant that Karin has already had to apply for her work visa before she has the opportunity of visiting the different regions. At the beginning of December Karin will have to leave the country for a short time in order to get the new visa. This week she is at a conference in a different area and will be able to learn about this region.
Karin will continue language and culture studies in her current location until she has completed level two. She will study level three and four in the region where she plans to work. Pray for Karin’s next steps, that she can clearly see the Lord’s leading.