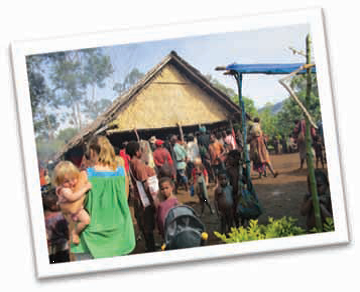 The Pal people know baptism as a practice frequently done by the local religious group in former days. Hearing the teaching from the New Testament was all new to them:
No membership of a new religion or church, not even of New Tribes, no earthly blessings and no special power that is given with the water. Baptism is simply an outward testimony and symbol to what has already happened on the inside.
Early in November there will possibly be a day for baptisms, pray that this will be a milestone in the lives of many young believers as they see each other standing up for what they believe. Axel and Sandra Fachner hope that it will draw the believers together.
So far the majority of the population of the surrounding villages has faithfully come to the teaching and professes to believe in Jesus Christ. But there are many who still can’t answer the foundational questions about faith. Pray that the Lord would give the team wisdom and discernment as some have not understood the heart of the Gospel but may still ask for baptism.
In the passing months conversations have revealed how deeply some things are interwoven in their worldview and it is great to see that they now desire to know what is right and good. Some of the questions though that reappear in different forms reveal the human desire to justify sin. A lot of questions about moral issues like marriage and how to deal with sexual desires have come up again and again. Please pray that the team understand the thinking that is behind these questions and be able to point them to the cross and to what Christ offers to those who trust in Him only.
They have also had numerous encouraging conversations with Pal people who drink in the Word of God and act accordingly.
Two teenage girls came up to Sandra one day and said that they had now decided to follow God’s talk. A strong believer in their village had challenged them about their motives for attending the teaching and said it was not enough to just come.
God’s Word is changing lives. Pray for the missionaries to be patient in teaching and discipling them.
Axel and Sandra’s children are doing well. Tom is finally four years old. He was counting the days for over a month! He was looking forward to cake and ice-cream and presents sent from Germany.
Lilly is getting bigger too. She doesn’t look so fragile anymore and they are glad for that. She has discovered a love for shoes (wearing only one on the wrong foot!) and also loves to sing and talk; not that Axel and Sandra understand a word of it.
Next week Axel and Sandra will leave their Pal village for four weeks. Firstly Axel will be attending the advanced language workshop in Madang for ten days and after that the family will fly to Goroka to be part of the annual conference for the missionaries of their area. Right after that Axel and Sandra will have Pal team meetings with leadership. Pray for soft hearts, willingness to understand and eagerness to forgive each other as they seek to resolve some team issues.