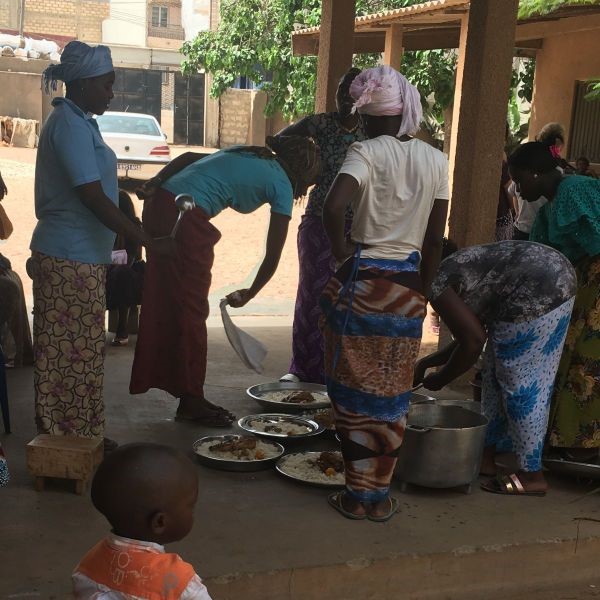 In West Africa, last week Jonathan and Naomi attended their first Senegalese wedding. It was for a lady who has worked for a number of years as a language helper for NTM. Jonathan and Naomi planned to have garments made out of matching fabric for the occasion as a culturally appropriate way of showing her their appreciation and esteem. Their first hurdle was that the tailor did not speak much French. The road signs, schools and government work in French, but people trade in Wolof and also use their own first language in the home. It worked out ok because Naomi has recently made a friend who helped them communicate to the tailor. Jonathan was quite excited because for once in his lifetime buying a shirt with long enough sleeves was going to be straightforward!

When they went to collect their clothes, they were not quite ready so they returned in the evening (tailors will stay open until 9 or 10pm) and Jonathan tried the clothes on…he could not believe his eyes: the sleeves for his shirt were way too short! Thankfully one of the other missionaries who had purchased the same material had some spare and the tailor was really nice about it and spent a good chunk of time the next day working on his shirt and it was done just in time for the wedding.

Struggling to find the language to communicate in awkward situations, making cultural blunders, trying to get a correctly fitting shirt without offending people, being patient when things don’t work in the way they would like…they have had lots of opportunities to grow, to learn and to depend on the Lord!

Jonathan and Naomi long not only to be able to communicate with people but even more to relate to them culturally. When there is a mistake in an order and something needs changing, what is the culturally appropriate way of dealing with this in an inoffensive way? How do you make friends and form deep relationships? To help them, the elders of a local church have found a godly couple who will be their “host family.” They will be looking for an apartment near to them to move to and will (hopefully!) be moving house around mid-July so that they can visit them a few times each week. They have two children who are just slightly older than theirs. Lots of people have been praying about the selection of this family and they know that the Lord has brought this together. Their relationship with them is new and awkward and they would value prayers for a deep and blessed relationship with this dear family.

As part of the move, they will also need to form new friendships with the people around them in their new neighbourhood. This is really important but challenging when it’s hard to distinguish faces and every name is new and hard to pronounce!

They would love their children to connect and relate to other African children. Whilst in the long term they plan to home school, they are praying about putting them into a school for a temporary period of time as they know it will be an effective way for them to learn language and culture. This is not without its challenges – please be praying with them about the where, how and when.