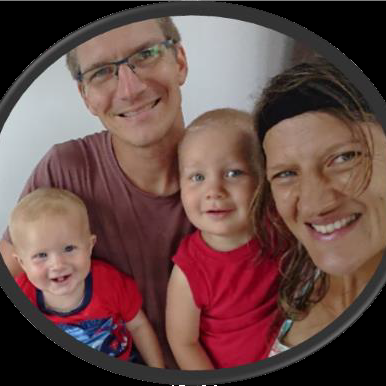 Philip and Natalie Hansen with Louis and Timon serve among the Kovol people of Papua New Guinea. They are doing fine and their co-workers the Stous’ were able to go back to the USA for their planned home assignment. Due to restricted travel conditions, the language learning consultants were not able to visit them to officially ‘kick off’ language learning. Instead, the team had a virtual meeting. Praise God for available internet so far.

Now they are learning a lot of nouns and practical expressions and starting into some basic verbs. Some consonants are unfamiliar to their language. However, thanks to the training, they can learn to recognise them. Philip and Natalie speak Pidgin, the trade language, with the people. But there are lots of misunderstandings and the people often translate what they say so that everyone is clearer about what is trying to be communicated.

Philip works full time on language and culture learning. In addition to that, they have one day a week where they work on projects on the house, since there is still a lot to do. On Sundays they meet as a team for ‘church’. In the afternoon, there are often people who want to hang out.

Natalie still finds it hard to balance her schedule and time as she navigates through the things that come up, the needs of her children and family and so on. She loves to learn the language, but in the evening, she is just too tired. Philip takes the kids for an hour in the afternoon if he can, so she can focus a little on language.

In Kovol culture, the family is important. This is not just mum and dad but also uncles and aunts (also called mum and dad) and grandparents and cousins… When they count or list all their children, they count the miscarriages as well. Many of them have lost a lot of children, sometimes even more than are alive. Philip and Natalie lost a boy during a pregnancy in PNG. So, Louis is not their first born, he is called their second born. They call Louis ‘yagam’ which means second born son. Natalie loves that because the firstborn counts… and is not just ignored and she can suddenly relate to the people in a different way, having gone through it as well.

Louis loves to play with the other kids outside. He is learning a lot and he even speaks some Kovol and Pidgin words. He is also learning to share food as they do. He loves the sugar cane and people often bring some for him. Timon is ok for a while outside, but then he prefers just to be at home with the family.

Life is not always easy. Many times in the last three months Natalie reached her limit, even thinking, Lord I cannot do this. Nevertheless, she knows God and He can and wants to do it through them. One of those moments was when she ran into a huge spider web with a big spider in it inside their house. It was dark and the strings were strong… becoming fully awake and trying to get out of the web, she kept running into more of it. That was just too much. This was supposed to be her ‘safe place’, her home. That same week they had a centipede in their house and lice on Louis and Timon and many other challenging things. Natalie recognises the greatness of God. She says, “First this is not our home and secondly God can do anything through us. I still hate those big fat spiders, but I hold on to Him and I know I can trust Him. I am so excited to share God’s Word with the people here one day. These people are becoming very dear to their heart.”

Thank you so much for praying.