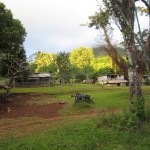 Ben and Wina continue to bring these questions before God because in and of themselves they are not able. Pray that God would give wisdom for those daily decisions and for His guidance as to what they should change in order to better live their everyday life for Him.
In the beginning Ben and Wina found it rather difficult to get into the routine of language learning; especially when things like sickness or big events in the village came up. Pray that they would be disciplined with their daily routine, but also that they would be flexible whenever necessary.
A couple of weeks ago the three missionary families hosted a traditional feast for the village in an effort to show their appreciation toward them for all their help with house building. As they’re still relatively new in Bali and didn’t know what that all should look like, they gave over the organisation and implementation of the feast to the village leaders. First, they had to gather stones for their fireplaces. Next they found banana leaves, lengths of bamboo, and firewood from the jungle. They laid pieces of pork in between banana leaves, in between hot stones where they cooked for several hours. In the morning the ladies peeled sweet potatoes (each for her family) and then cooked those, too, amongst hot stones. In the afternoon a few hundred people came together and the food was divided up for the various groups and they had a “picnic” on the football field – and the “white people” were supposed to sit at a table and eat in front of everyone. A few men had some words to say to those gathered and some men received small gifts of money in appreciation for their help.
The whole thing seems to have been more or less a success.
It is now in the middle of dry season. For several weeks it’s barely rained and their water tank is almost empty. The people in the village get water via a pipe connected to a spring up the mountain somewhere but apparently even that can get scarce in dry season sometimes. Pray that it would rain from time to time so that their water needs would be taken care of but also that they would learn how to use water more sparingly. God already knows what they need even before they ask Him. He controls the weather. Ben and Wina need only learn how to be good stewards of what He has given them.