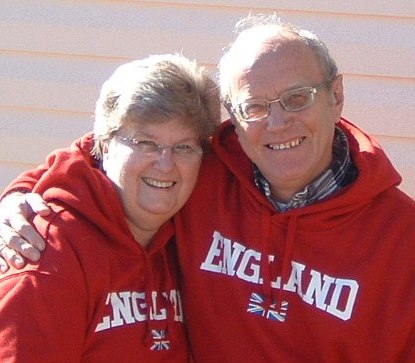 Last November the garage door broke as Robert was closing it with the rope which also broke, resulting in the door landing heavily on his tail and hip bones. To shorten a very long story, he went from difficulty in mobility, of any kind, to resting for weeks in their recliner, both night and day. In the New Year, they pursued the situation further. It seems he had a spinal stenosis pinching a nerve and has since had two epidural-steroid injections into his back, which are bringing the much needed healing and relief. So although their Christmas was a very quiet one at home alone, they were able to share the day with an elderly widow who would also have been alone and Robert even managed to sit at the table for dinner.
Going back to Thanksgiving, it was a real joy and the first time they had their son Timothy with wife and children Asa and Asher visit with Terra-Leigh’s parents Mike and Nena, with whom they had some great discussions about heaven and wonderful help in the kitchen.
They were very grateful to be able to Skype with their daughter and family for a while on Boxing Day, all of whom seem to be doing exceptionally well in their school studies and extracurricular activities while both mum and dad are working full time.
News around the world has been astounding this past year, which has been unprecedented in the number of missionaries preparing to teach their people for the first time ever, the numerous outreaches of tribal churches and many New Testament and even complete Bible dedications. In all the years of overseeing prayer classes, Robert and Rosemarie have never seen so much activity. They truly count it a privilege to be involved in the best job in the world – expanding the reach of the glorious Gospel of Jesus Christ.