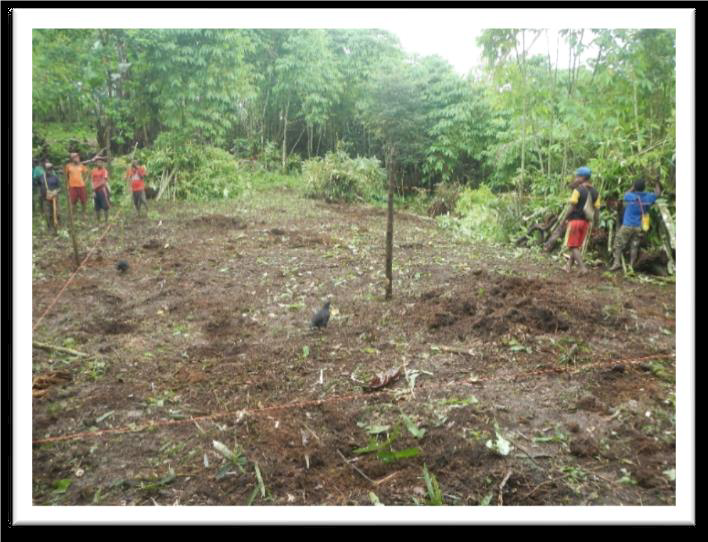 Steve and Gerdine Stanley with Oscar are currently in Madang. They have ordered their building supplies. The new date to start milling wood for the team’s houses is in early August. House building is planned for mid-October but they expect plans to change.

Getting ready to move into a bush location sounds pretty exciting, and it is! However, it is also a lot of hard work and drudgery too. They purchased 38 sheets of 15mm plywood that will become the floor for their new home which needed to be prepared.

Plywood is easy to install and when treated properly should last. A protective layer is needed in the form of polyurethane to stop the termites etc. It is amazing stuff –liquid in the tin, but a skin like plastic layer when dry. Each of the sheets needed two coats top, bottom and sides, which they did in batches allowing time for it to dry in-between. It took them five days of painting (doing their co-workers the Stous’ sheets too). All those varnished sheets are now ready to be lifted in a net under a helicopter for use in Kovol. In the meantime, they are storing them but it is just one small job done in the mountain of jobs needed to be done to build a house in the middle of nowhere.

With the hardware store taking longer than expected to process their order they found they needed to stay longer in Madang. The problem was the ‘Interface’ programme was due to fill the whole NTM base. Interface is a six-week programme where young people experience missions through classroom training combined with real life language learning in PNG villages. A last minute change in plans meant the Interface programme needed someone to teach for three weeks, and the Stanleys needed to stay in Madang. A perfect fit! So they have spent the last two weeks as staff, Steve taking a chunk of the chronological Bible course the students sit through. Steve himself is an Interface graduate and they are enjoying giving back to a programme that was life changing for Steve back in 2010. It is also fun for them to see students reacting to unfamiliar PNG culture and language. It takes them back to their first months in the country!