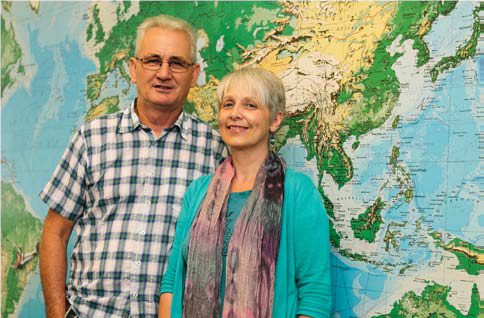 Graham was busy over the winter months with a project installing two biomass boilers on site. Many trenches for pipes had to be dug over the site and although a digger and driver was hired for much of it, there was still plenty of hand digging needed to negotiate drains and cables. Over the spring trenches were filled in, paths fixed and fresh grass seed sown. The site was quite respectable when conference time arrived. Pray for the digger driver who spent many coffee breaks with the team and heard them talk about spiritual things. He is local and they often see him.

Continue to pray for the stretched CMT team. There are projects to be completed in the singles dorm (new flooring, bathrooms need up grading and more showers added), and other dorms and buildings are in need of repairs and renovation.

For Carol the move to reception and reduced hours was timely as her dad was ill from December. He had two hospital admissions and Carol was able to work around his needs. As he improved her work got busier with conference bookings and organisation. A change of month, and change of roles for almost everyone involved in conferences made it a busy and challenging time, but they all said after, that it was the best Reach conference and God was glorified as we heard missionary reports and messages. The dates for REACH 2018 are back to their original month, March 23 – 25. Make a Difference conference continues to be held on the third weekend of June 15 – 17 2018

Carol has started to train and orientate the new kitchen manager and will be helping in the kitchen six days a week for the first three weeks of term until the new kitchen team has settled in. They would appreciate prayer for stamina for her and quick learning from the team.

Graham and Carol thank you for your prayers. Pray for faithfulness in their roles, and enthusiasm to get to know another group of students and volunteers, to be available to be part of their learning experience. Graham has one student returning to take the Cross Culural Communications Cours who will be on his grounds team again, but will have others to train.

Pray for contented hearts to continue to care for aging parents.