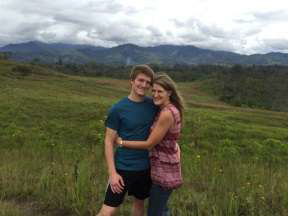 Another missionary couple had been teaching at the prison but needed to go home for a couple months. Philip taught the men and Natalie taught the women separately. Normally, about 20 men would attend and 30-40 women. Philip and Natalie were encouraged to see God working in the lives of some of them. In December Philip and Natalie travelled to Madang for a couple weeks to help with a translation seminar. Natalie helped run the childcare and Philip helped with maintenance and projects on the mission station there. A couple of other missionaries taught at the prison in their absence.

A week-long trip to tear down a house and send it by helicopter over the mountains to be used by missionaries as an office was another highlight in January. The house took two days to take down. Then after the weekend they started sending things over (mostly sling-loading it underneath the helicopter). Even with some technical difficulties, the team was able to send almost everything over that day. The team on the other side was able to get the building put back together in three days.

In February Philip and Natalie went for a week to a women’s conference. It was in a village about a two hour drive away and a 45 minute hike down and around the back of the mountain. Natalie was able to lead small discussion groups after some of the messages each day. Philip was the driver for the group of missionaries that went from NTM and he also helped with the cooking.
Philip and Natalie moved to Madang in March. Natalie is the nurse on call and has been overseeing the mission housing, guest house booking and cleaning. She also has been helping in the finance office as needed. Philip has been helping with maintenance and projects on the mission station. He has been overseeing the night security guards as well. They are serving in Madang in the hope that they can get to know the new missionaries who arrive there to begin orientation. They’ve enjoyed getting to know the latest group of three families.

Philip and Natalie are pursuing the possibility of working with one of these families after that family have finished orientation in a couple months. Pray for this time of finding and forming a team. Pray for Natalie as she has had an inflamed nerve since December and sitting is uncomfortable and damages it even more.

Next week Philip and Natalie are going to visit missionaries on a volcanic island. They will be there for the weekend and are looking forward to spending some time with them. Currently, their partners are home visiting family and churches, so they are alone out there.

Philip and Natalie hope they can be a blessing and encouragement to them. The missionaries are currently learning the language. The Manam team hopes to reach this huge people group with God’s Word soon. From there Philip and Natalie plan to fly via Goroka to Hoskins where they are going to fill some staffing needs for two months. There is a personnel shortage on the mission station there. In early July Philip and Natalie hope to meet up again in Hoskins with the couple they are hoping to team up with. Please pray that God would make clear His plans and shows them which people group they should go to.