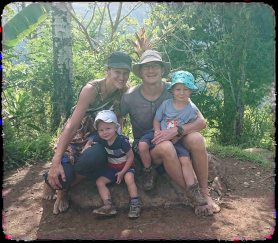 Over the last few months, it has been very busy for Philip and Natalie Hansen with Louis and Timon, who serve among the Kovol people of Papua New Guinea. They had a culture and language evaluation, went as a whole family to a garden house and overnighted there, welcomed back their co-workers the Stanleys, and worked on some of their language goals including orthography, grammar, discourse analysis and many other things.

Praise the Lord by His grace, Philip reached level 7 out of 9 in his evaluation. Natalie did not progress to a higher level in language as she had to focus more time with their kids. With the help of the consultants she saw where her struggles are with the language. By their next evaluation, she hopes to have made some progress as well.

One goal was to move away from writing the Kovol language phonetically and develop an alphabet for the Kovol people. Philip took a lot of time to go through the team dictionary and analyse it. Then he drafted the initial phonemic write up (the paper explaining the reasons for the letters in the alphabet). After input from the team, he revised it. Later, Steve revised it again. Now they have a tentative Kovol alphabet.

Since they cannot use a textbook to learn the grammar for the Kovol language, they must write the grammar rules themselves. This will help each one in the team and show to the language consultants that they understand how the language works. Philip shared his grammar notes with the team and Steve is now formatting it. He is also working on adding more to it. Rhett finished a required socio-linguistic paper, which should help later with the literacy programme. Philip and Natalie are now gathering and transcribing longer texts to study in their discourse analysis. This will help them to understand the way Kovol people talk at a paragraph level. They need to be able to communicate God’s Word clearly so as not to confuse them.

It is a blessing that all the team are currently in Kovol. However, Philip and Natalie are preparing for home assignment. Being away at this time will give the rest of the team time to catch up. Leaving Kovol in June, they plan to stay six months in Germany and then three months in the USA before returning.

Thank you for praying – the body of Christ working together to reach the Kovol people with the Truth!