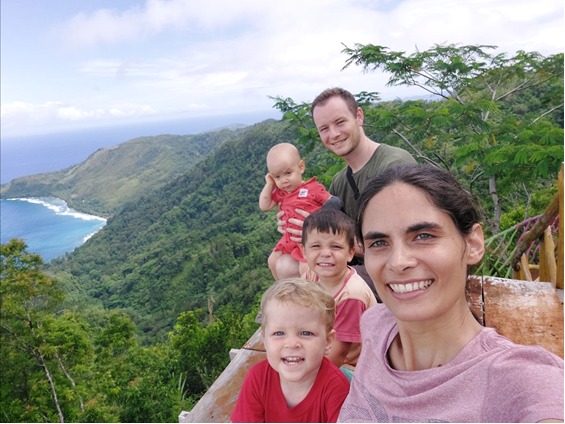 A language consultant was able to visit Ben and Tabea’s location in Asia-Pacific in order to make a language evaluation for each family in their team.

The results of this evaluation showed that Ben and Tabea’s language ability is more or less, where it needs to be. Now they need to focus more on relationship building and cultural study.

They know that relationship building is not naturally their strong point; it is something they have been trying to work on. Although it was good advice from the consultant, it was not easy for them to hear because it was pointing out their biggest weakness.

It is also hard for them to stay motivated to build relationships knowing that they will go on home assignment in about four months.

After their evaluation, they decided to take a break as their last holiday was more than a year ago.

They found an amazing beach that was quite remote; you have to take a dirt road to get there. Because it is so remote, nobody minds if you camp on the beach, so as a family that is what they did for almost a week.

Just before their holiday, one of their children hurt his hand. It has now been more than two weeks and it still has not fully healed. After their holiday, they had a sickness bug. Ben had nasty spots appearing in different places on his body and felt dizzy. It turns out that the dizziness was caused by high blood pressure and so he is taking antibiotics for the infection as well as medication to lower his blood pressure.

Sadly, after initially seeing many ‘green lights’ for one particular area where the team had been surveying, the last survey trip showed it to be a closed door. It is a blow because they have been surveying this village for more than six months, so it feels like a big setback. More survey trips are planned but this time over a broader range and in less detail.

Pray for five of their teammates who leave this week to survey a new area, that God would give them safe travels and wisdom in communicating with the locals.

Progress in culture and language

A great holiday adventure and safety at the beach

New relationships in the community, and that they learn more about culture