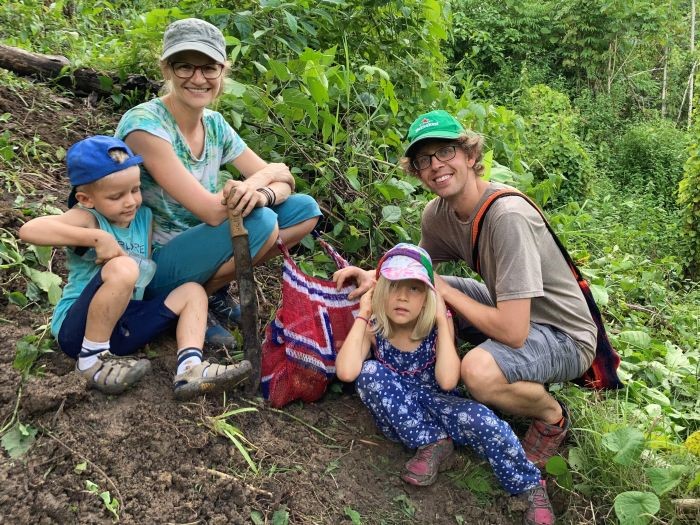 Christopher and Lilli Meyer with Linda and Silas are in a busy season right now and are approaching the end of their first term in Papua New Guinea. They have been in PNG for almost four years and plan on going back to Germany for a full year in less than two months.

That is a big transition! They are super excited to finally see family and friends again who they have not seen in four years. They are looking forward to eating German bread rolls, cheese, chocolate that has not melted several times before it makes it into their fridge, and many other things. Linda is going to attend a small Christian school; a supporting church has organised an apartment for them, and the youth is renovating it right now. Christopher and Lilli feel very spoiled by their supporters and are incredibly thankful for each one of them.

They will definitely miss life and friends in Kaje. While life in the jungle is not easy, they have grown to love it. It does like feel home. Christopher and Lilli, are nervous about going back to a different ‘home country’ than they left. Pray for them as they have to say many goodbyes in the coming weeks.

Lilli had another language evaluation just a couple of weeks ago and is thrilled to tell you that it was her final one. She was striving towards getting to this milestone before heading back and Christopher was so supportive in many different ways which is the biggest blessing. They really love working together so closely and were happy that they could do a big part of discourse analysis together. Although Christopher took the lead in it, Lilli definitely learned and benefitted from it just as much. However, they will probably never stop learning more of the Kaje language and culture.

In April, they were finally able to start a new literacy class. There are only eight students this time and apart form one student lady none of them has ever gone to school before. Everything from how to turn a page in a book to how to hold a pencil has to be learned. It is definitely a big challenge and requires a lot of discipline and stamina as well as concentration. All that is not very typical in the day-to-day life of the Kaje. Please pray for those that find it harder than most. Pray that they will be motivated to do their homework on their own and are willing to walk the extra miles it takes to learn such an “abstract concept”. Being able to read on your own does change the world but it requires hard work to get there. Please be also praying for wisdom and patience for the teachers so they can really help the students.

At the end of April, a believer was bitten by a snake and died the day after. He was in his thirties and a father of five kids. Dying from a snakebite seemed to be unheard of until then. People are always afraid of snakes and some people have had reactions to snakebites before, but no one had died from it. The man that died was a post-literacy teacher and he was a man who always encouraged others to let go of their old ways and thinking and follow Jesus and His teachings instead.

He was not afraid of death. That is big! Death has lost its sting. He was looking forward to be with Jesus and told others not to worry about him. Moreover, it is awesome to see how happy people are for him. Pray for his wife and children.