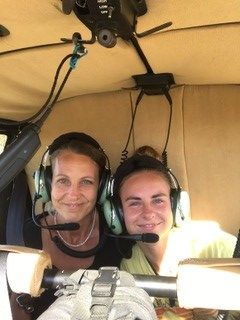 Donovan and Charla Epp and family thank the Lord for His protection in their travels back to Canada and their self-isolation time. The last couple of weeks in the Philippines were packed with great times, meaningful events, change of plans and tearful goodbyes. Everyday seemed to bring new challenges and big decisions to make.

Here is a glimpse of how we wrapped up their last term in the Philippines before returning to Canada (thankfully just before the Metro Manila lock down due to the corona virus.)

Nothing encouraged them as much as seeing a helicopter full of friends come over the ridge and land in the Agta village. The community warmly welcomed the team from Canada, as the Agta had been practicing all week to pronounce their names. What a blessing to serve this community together with a team.

The day after the team arrived Don’s best friend in Agta land, with his wife and mother-in-law all decided they wanted to follow the Lord in obedience and be baptised.  All have been believers for several years, but after going through ‘Phase One’ (teaching the Gospel from creations to Christ) again, they all desired to be baptised.  Don and Char were excited for them as they took this step.

It only took one day to strip the old roof off the storm shelter that would NOT have been able to handle another typhoon. Another five days of work on the centre and the new roof was on, as well as the new windows made with 1″ planks of wood.  Everyone who walked by the storm shelter/literacy classroom/clinic had the look of relief on their face as they saw the strength of the new roof and windows. During the storms of the last big typhoon season, sixteen families took shelter in this small building.

During the storm shelter fixing, the new midwife for their area happened to be visiting from the ‘outside’. The midwife, her husband, and her colleague were all very excited about the possibility of working out of this building in the future. Char was so happy to show her the facility and hand over some medical equipment to her. The midwife’s husband picked up a paintbrush, helped paint the windows, and had some other plans of how to make it feel like home when they come back for more visits. The fact that they came by at this time assured them of the medical help for the Agta in the future.

Is was not only the storm shelter that was in focus, but organising medication, and making protractors for some school kids was also on the project list. The team was very flexible and enjoyed helping the community in whatever came up.

They had been preparing for their now teenage daughter, Thea’s leaving for years.  Thea’s last year in the Philippines with the family was packed with plans.  Many of those plans were changed because of death in the family and in their last days, because of the corona virus.  They had a last celebration with the community of Philippine uncles and aunts, grandmas and grandpas, and friends. However, with traction building in the Philippines with the coronavirus they decided to cancel the vacations plans with Don’s brother and family joining them for a visit, and return to Canada with the team before the scheduled Metro Manila lock down.

Thea was able to say her goodbyes. Goodbye to a life of jungle hikes and an ocean playground. A life where she could have stood out, but one instead where she fitted right in as she embraced those around her. She learned their language and culture and loved sharing life with them. She displayed Jesus to her friends before they even heard the Gospel.  She will deeply miss her ‘uncles’, ‘aunties’, tribal ‘grandparents’ and ALL her friends. Despite the goodbyes being much sooner than expected she walked with strength showing love through her tears and hugs. This village is not the same because of her, but Thea will also be forever shaped because of them.

They are all excited to reconnect with friends and family in Canada and the USA and share but again their plans have changed with social distancing. Please pray for them as a family in a time of big adjustments.