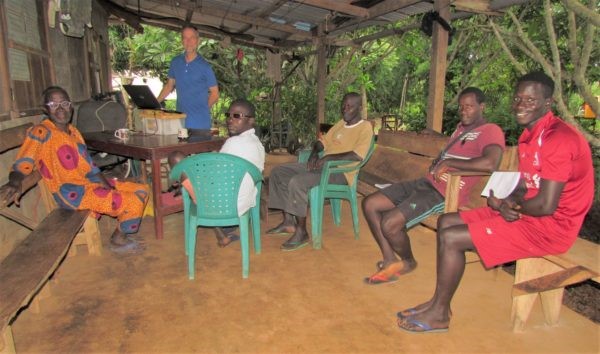 Recently eleven believers were baptised at the little church in the village where Kirk and Yolanda Rogers serve in West Africa. It has been a long time since the last baptism. Several children from Christian homes have grown up and come to trust Jesus. Others have moved into the area and joined the group. Kirk and Yolanda had been talking about what baptism is, and its importance, and the eleven indicated they wanted to be baptised.

They spent some weeks teaching what the Bible says about baptism, to ensure everyone had a clear picture of what it is, and is not, and that those who wanted to be baptised were well prepared in their minds and hearts for this event.

A good crowd of believers from three churches in other towns joined them for the service. Since they live in the midst of another, sometimes hostile, religious group, it is always an exciting time for the church when they get to fellowship with so many others who believe as they do.

Kirk and Yolanda believe the baptism ceremony can be a powerful opportunity for the church to witness both to itself and to unbelievers about who Jesus really is and what it means to believe in and follow Him. Baptism candidates gave a brief testimony regarding their faith. A theme that ran through each testimony was their experiences with persecution.

Pray for these young believers, that they would grow in their faith, and remain strong and able to resist the strong pressures put upon them in this hostile environment.

Kirk and Yolanda asked for prayer for a friend who was dying of liver disease. He did die, but not before telling them, that he believed what he had heard from the Scriptures concerning salvation through faith in Jesus. Prayer was also answered for safety as Kirk and others worked to get a better phone and Internet signal at their house. The antenna and modem were mounted in a mango tree and are able to deliver a usable signal for some of the Internet needs. However, they still have to go into the bush or to town to obtain a better signal for some of the things they have to do online.

Preparation is underway for a translation check with a consultant in the upcoming weeks. Pray for Kirk and his helpers as they complete the final pre-consultant checks on several books and chapters of Scripture. The plan is to do a “face to face” check virtually, using a Zoom-like application, as the consultant is unable to travel at this time. They will have to do that from town, where they can get adequate internet. Pray that the signal will be strong enough and that the check goes well.

Thank you for being a part of the work among the Landuma people.