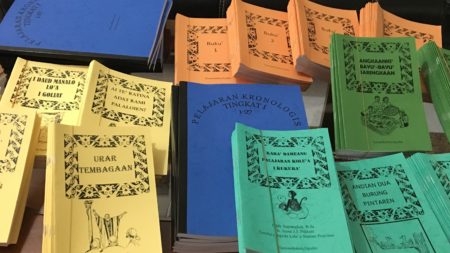 Darcy Berglund has been back at full time ministry for two months. The focus of her first month back at work was finishing the Asia-Pacific translation of the literacy software. This is a project that she has been involved in for the past two-and-a-half years. There will still be some work on it to come but she is very thankful to be able to be done with it for now. The month of May was concentrated on several other projects but especially concentrating on finishing two projects that have been ongoing for the past two years. One of them is now at the printers and they are still working on the second one and making great progress.

This second project is more of a translation/discipleship project involving many hours on the phone with her team member in Asia-Pacific. They are both learning a lot and Darcy has really enjoyed the time spent with her co-worker even though they have to work apart right now.

Recently Darcy spent three hours on a video call online to a co-worker in the village, teaching her how to attach a draft to an email and send it, open a draft, check it and save it to her computer. Very basic things but they would normally pass files back and forth on a USB drive. Hopefully, she will get the hang of it soon. Her co-worker has finished drafting 2 Samuel chapters 10 – 12 and is currently finishing up Judges 3 – 6.

Being involved and working with her team again after a year of home assignment is a joy for Darcy. Even though she is separated from her colleagues on different sides of the world right now, they are able to continue their ministry together. Darcy recently had her three-month cancer checkup and the doctor says that there is no recurrence at this time. Another check will be scheduled in six months. So that is really good news.