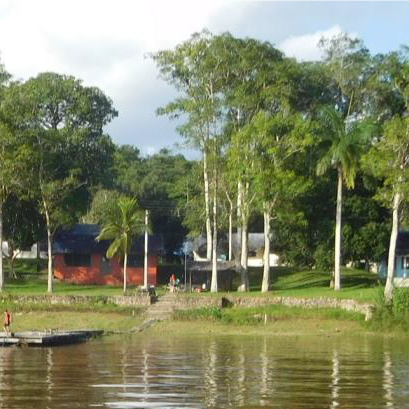 In his BSc in Civil Engineering graduation year, 21 years old David Stienstra, had the desire to set apart a year to serve God on a foreign mission field.

In February, David boarded a plane in Amsterdam and travelled to Manaus, Brazil. One of the staff from the New Tribes Mission School picked him up and took him to the mission school initially by car and then by boat, since you can only be reached the campus by boat. On his arrival he received a warm welcome.

At the end of February the high school students organised a three days camping trip and David was able to join them along with other members of staff.

Teaching and preparing the lessons takes a lot of time, which certainly applies to the experiments he prepares as a demonstration of the theory. He enjoys teaching and is encouraged. He also enjoys working with his hands such as making grills to be installed in front of the windows, collecting rubbish, replacing the lightbulbs in the lampposts when they no longer work, etc. He often helps to mow the grass because it grows very fast.

In the beginning David had to get used to a lot of things. He was not used to the warm and humid atmosphere and smell. It is the rainy season, so it is pouring with rain for a few hours (almost) every day. At first, he found it annoying, but soon realised it cools down everything and everyone. The only thing he sometimes misses is the wind, as he comes from a windy part of the Netherlands.

Besides the weather, he had to get used to the surroundings as well. At night quite a number of animals wake up, although this never has put him out of his sleep. The crickets make a lot of noise but many insects and other animals like birds and monkeys join them.

Most people speak English and Portuguese, but some speak just Portuguese or English. One of his students is still learning English so during David’s teaching his countrymen translate in their mother tongue some of the time. Despite the friendly community, At times David experienced a language barrier and it took him some time to find his place. His hope is in Jesus and He leads him through all the differences.

There is also time to hang out with the students or play a game of volleyball, soccer or basketball. Living so close to the Amazon, he likes to swim occasionally (often watched by some curious dolphins from a distance).

His time at the mission school in Puraquequara has enriched his faith. It is an opportunity to testify of God, who He is, what He does and has done in his life. Last week he was asked to speak in the Sunday church service, which was very special as they looked at Revelations 1.

David is thankful for prayer. Pray for a continued enjoyable and fruitful time at the school and for his relationships with students and staff. Pray for more staff members and teachers.

Trust in the LORD with all your heart;
and lean not on your own understanding.
In all your ways acknowledge him,
and he shall direct your paths.