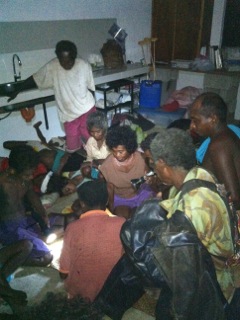 Thank you all for praying with regard to the ‘Super Typhoon Mangkhut’.

Hours before the storm was about to hit, it was predicted to be a more direct hit to the city where one of the mission’s guesthouse and helicopter is based. However, the storm shifted. The typhoon hit the city early on Saturday morning.  It was a crazy scary thing for them to experience.  The typhoon was so loud, with the wind and the rain, and debris flying around hitting buildings; metal roofing flapping and creaking.  For most of Saturday, the wind stayed quite strong, but the missionaries were able to assess the damage to the neighbourhood, as well as later in the evening go for a drive around town.  Everywhere they looked debris, roofing material, tree branches and whole trees had fallen.  In town, signs were down, large glass windows on businesses smashed up and everyone was out beginning the clean up.  As a whole, the city was more prepared this time for the typhoon.

Donovan and Charla Epp and family had moved from their coastal village location to the city for safety. The shift of the typhoon’s path to the north again meant a pretty direct hit for the village.  Their hearts were so heavy for their friends and neighbours.

On Sunday, they were able to fly out to the village.  It was heart-breaking for them to see the damage even from the air.  However, they are so thankful to report that there were no injuries or deaths.  This is such an answer to prayer.  Thank you for standing with them in prayer for the community.  They were beyond thankful to see their friends and neighbours, give hugs and hear about the typhoon.

The people said it was terrifying, and was scarier to live through than the last super typhoon that hit two years ago.  Most of the community hid in the cement buildings.  However, some of the Agta stayed in their houses, and one family decided to go up to their rice fields for the storm and hid under a tarp.

The typhoon did a lot of damage to the area.  Most of the cement houses seemed to do ok, even keeping their roofs.  Other houses lost roofs, some were left in piles, others were completely blown away. The school down the coast lost the majority of its roof.

Don and Char’s house was also damaged. Once again they lost a portion of their roof. Thankfully, they were more packed up inside the house so they believe that the water damage is limited. Also the majority of the storm hit from the north meaning the wind didn’t come off the ocean, so they did not get the salt water damage, nor all the sand.

They were only able to be on the ground for a short time before the helicopter needed to take off again to return with them to the city. The damage to the rice crops, means food is a present need, but also a future worry. Don and Char hope to fly in a few sacks of rice on their next flight to the village.

Please continue to pray for this community. Pray for wisdom and strength as Don and Char again begin the process of fixing up their house and to know how to best help the community with its needs as well.

Again, they cannot thank you enough for your prayers!