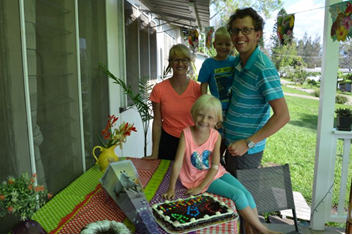 Christopher and Lilli Meyer with Linda and Silas spent a few weeks on the NTM base in Lapilo PNG at the end of last year. The plan was to just take a two-week break, but they ended up staying a little longer. Lilli, had a few tropical sores on her left shin that were very reluctant to heal. Help from those at the clinic and a change of climate helped the wounds to heal. They were back home in Kaje  for Christmas. There was a lot going on during the holidays, but it was a good time. There was so much fun as well as laughter but the Kaje were also able to hear the Christmas story, and their co-worker explained to them the meaning of Christmas – which had no meaning for them before. Many people have heard a lot from the Bible within the last 18 months, so they were truly surrounded by many people who rejoiced with them about the birth of the Saviour.

Contrary to many other places in this world, 2020 was a year of hope and freedom for the Kaje people. Fear and bondage were characteristic for their day-to-day life until not too long ago. But now, many people are set free from those, because Jesus is greater than any power of this world. In January thirteen people were baptised. Not long after that was the first communion with the Kaje believers.

Christopher and Lilli are planning their home assignment for July this year. They are looking forward to seeing many people who they have not seen in a long time. Linda will be able to attend a small Christian school for that time.

Christopher and Lilli both had a culture and language evaluation a few weeks ago and were very encouraged. Christopher reached the level that is required to start taking on other ministries and Lilli is only one level behind. Right now, they work on discourse analysis together as much as possible. When that is completed, Christopher would like to start Bible translation. An item for prayer is that Lilli hopes to have another evaluation before they go on home assignment and maybe reach the same level as Christopher.

They were very thankful that their co-workers, the Myers, returned in early-November last year.

Pray for their co-worker who is working on rewriting the literacy programme from the USA.

Christopher is going to oversee the next literacy class and may be involved with teaching. It would be good if the next class could start in March.

Christopher and Lilli also help with medical needs. Wound care is one of the things that they have done a fair bit of in the last years.