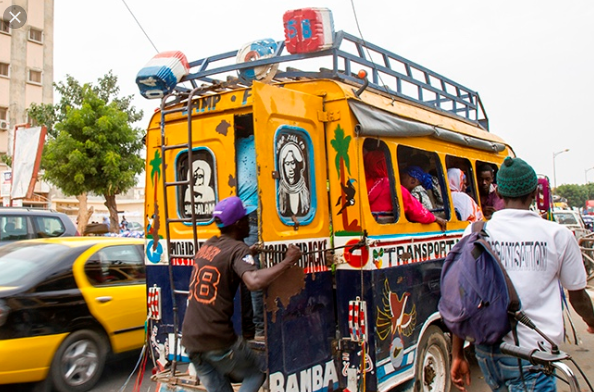 Learning, unlearning, amazed and mistaken are keywords that fit in this time. Every day she is amazed by the amount of people who travel on foot, by horse and carriage, taxi, bus and, sometimes, by bicycle. The idea that a bus is “full” does not actually exist. If a bus does not have a door, someone can easily hang on the doorpost and luggage can be dropped on the lap of any person.

These are incredibly educational months. Living with Ivorian housemates is often a source of questions: How do people live, eat, and think in West African culture? For example: When she prepares food, does she always have to count on more people because she doesn’t know if her housemates have already eaten? They always share too… Jenny is happy to be able to postpone these questions for a while and focus entirely on learning French.

Each morning they learn, step by step, new (verb) words and sentence constructions. The first phase of six weeks has already come to an end. 1000 words have been discussed. The second phase has begun, in which they speak more in a team of three students, using the past tense as well as the present tense. She is thankful for the Senegalese language helper who uses picture books to help. As a child learns to speak, word by word, the language study is also setup: from simple to complex, in five phases. Everything is recorded, and Jenny listens, back at home, to retain as much new vocabulary as possible. It is intensive and also effective! Pray for wisdom and strength to learn French, and to study daily.

Jenny recently enjoyed the arrival of a friend from the Netherlands, who works with Mercy Ships. The “hospital ship” will be in the port for several months.

Soon Jenny will hear to which host church and host family she is assigned. At the beginning of next year, she hopes to move to the neighbourhood of this family and to get to know the language and culture better from the ‘inside’.  Pray for God’s help for the couple that make contact with her possible host churches; that she will find a place to live near them and have a host family where she can learn a lot of language and culture, and feel at home.

Pray for more workers for West Africa. The need is great.

Also pray for the health of Jenny’s parents.