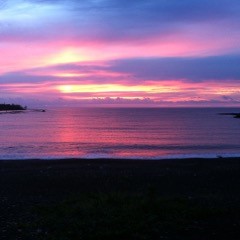 Recently they were blessed to have a visit from some church planting consultants. The first day of the three-day visit Don and Char did a walk around the village to give the consultants an understanding of the dynamics of theAgta and lowlander situation. The other two days were spent meeting together. In the meetings, they looked at the back over the last few years and celebrated the Lord and how He had brought many Agta to Himself as His Word had recently been taught. They also spent time in meetings discussing the future and what they should anticipate and watch out for in the church. It was over all encouraging to have a visit from church planters, many of whom had been in Don and Char’s shoes themselves in the past. A couple of the church planters had also worked with semi-nomadic people, so they could understand the difficulties and dynamics of teaching and ministering to a group like the Dupaninan Agta.

As Don was preparing for teaching last Sunday, five young men showed up at the house and started to help with getting their meeting place (under the house) ready. Don then asked them to find the passages that he was going to teach from and to highlight them. It was clear to see that the missionary team need to start teaching literacy very soon as the young men had a difficulty finding page numbers and passages (understandably), but, they were eager to learn, and took pride in highlighting the required portions. The missionary team want them to feel ownership and responsibility. Pray for these young men who may well be future leaders of the Dupaninan Agta church.
There were two big medical situations in the last couple of months. The first involved a boy climbing a tree with a machete and the machete falling onto another boy who was at the base of the tree. They immediately called for the helicopter, and within an hour the injured boy was at the Tuguegarao hospital with his parents, getting the proper attention that he needed. Praise God for the good weather and an available pilot.
Because of the distance to the hospital, removing the stitches had to be done in the village. An Agta lady, watched as the first stitches came out. Then they gave the lady the opportunity to help and with a steady hand the lady removed remove the last stitches. It looked as though she felt honoured to be a part of the team in helping the Agta boy. Don and Char pray that they would be able to empower the Agta as they continue to minister to them.

The second medical situation involved a new believer who was walking back to the village with her husband when as she puts it, her ‘legs stopped working’. She was only a three hours away from the village at this point, and Don and Char just assumed she was tired, as many are during this 43 km jungle hike. When she was carried the rest of the way by a couple of Agta men, they realised that something was quite wrong. She seemed to be paralysed from the waist down.

Looking back at this story, it really highlights the team work involved to bring help to this lady. Don and Char contacted a doctor right away. He told them a potential potassium deficiency was likely to be causing the paralysis, and suggested medication that could help. With a supply flight due that afternoon, they contacted their supply buyers who were busy in Tuguegarao, filling the order to go on the flight. Their supply buyers were able to find the potassium tablets and so they were flown in on the flight along with the supplies.
Within two days, the lady could stand! The next day she walked over to Don and Char’s house for coffee. This situation gave plenty of opportunity to sit and talk about God together with the lady. The very coolest part was that the ladies husband said, “We are very thankful for your (inclusive) help, but we are thankful to the Lord for healing her.” This is maybe the first time he has said anything about the Lord. Don and Char are very thankful to their team who worked to help this dear lady. God is working in the hearts of the Agta.

After many, many, many, months since they ordered a new freezer from the USA. It travelled by land, by sea, by land, and by sea again, before finally arriving at its new resting spot, Don and Char’s home. After being bounced around for such a long time, they were quite concerned that it may not work. They all held their breath as they turned on this propane freezer and it worked! They are very thankful to those who helped with the purchase of this freezer, allowing them to store food for a longer period of time. It really is a huge blessing!