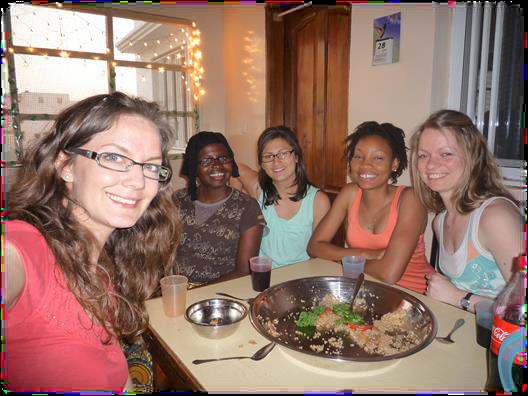 Anna’s local church evaluation went very well. Various church members met with a couple of guys from NTM to discuss how Anna has integrated into the church, got to know people, what she is like etc., and if they’re ready to send her on to the mission field. They were very kind in giving lots of positive feedback and didn’t have any hesitations in sending Anna out onto the mission field.

Last month Anna had her French speaking test over the phone. Even though her language helper thought Anna spoke the required level of French, the exam didn’t show that required level. Anna doesn’t don’t do well speaking under pressure or answering questions on the spot that she hasn’t thought of before. Anna is very relieved to not have to take another exam, but instead, just carry on with French sessions for a bit longer. More French learning doesn’t do any harm; she is down to just two hours of French sessions a day, which allows her to give time to other things that come up, and to help out in different ways.

Anna’s Trinidadian housemate, Leah, moved in in January with zero French and she’s settling in to life in Senegal, her first time in Africa.
Near the end of June, a big week-long conference, “Refresh Africa” (the first of its kind,) is planned for all the missionaries with NTM working in West Africa. (Before, it would be just those in Senegal, but now it’s for the whole of West Africa.) Its purpose is to “provide opportunity for our missionaries in West Africa to come together to worship, be further equipped for ongoing service, receive spiritual nourishment, enjoy fellowship, and allow God to refresh each one through one another”. Anna will be helping out with the music. The week before the conference a church development workshop is scheduled which should be very helpful too.
Anna plans on taking her home assignment in England between July and next January. It’ll be a good time for her to reconnect with friends and family back home. Anna is waiting until July so as not to miss the conference. Her older sister, Esther and family will be taking their home assignment the same time, so she hopes to be able to spend quality time with them too. (They’ll be based in Norway.) Esther’s still suffering from the Chikungunja virus she caught nearly a year ago, which has got worse lately and now she has a swelling under her arm which is very painful. Please pray for Esther to get the encouragement and help she needs at this really difficult time. She hopes to get some physiotherapy done when she’s on home assignment.
The couple who are working in the guest house here in Dakar are leaving for good in June. This leaves a gap in that ministry and so Anna plans to look after the guest house when she returns in January. She’ll be shadowing them before they leave so that she can learn what she needs to do. This ministry is just for the short-term until they find someone (preferably a couple) to take over long-term. Anna won’t be able to do everything as a single lady. Pray that there’ll be someone to look after the guest house while Anna is on home assignment. Long –term Anna is looking to join a team going out to a village work. Pray for Anna as she looks to God’s guidance in what He has for her.