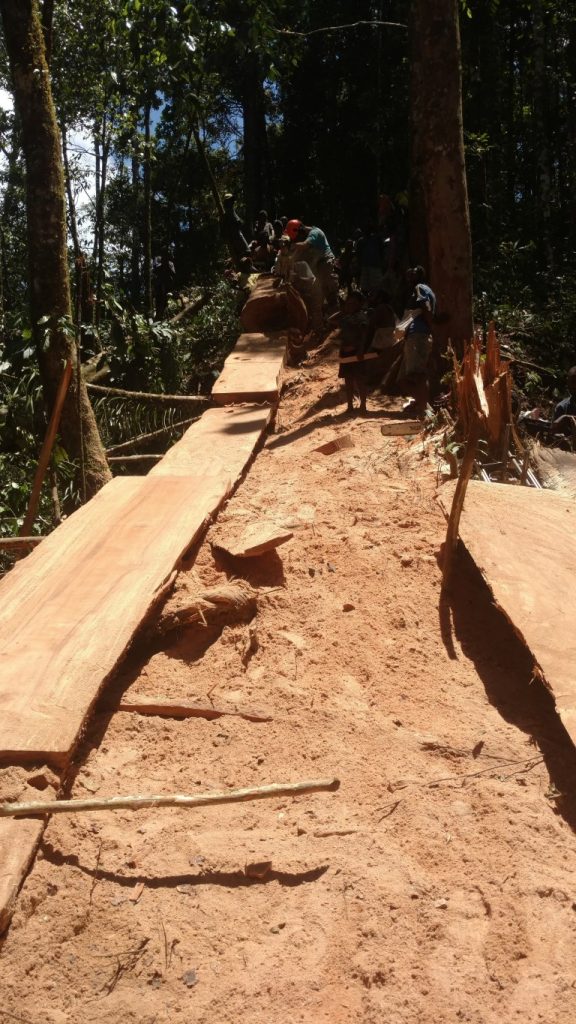 On day eight of their second milling trip in Kovol, Papua New Guinea, Rhett Stous and Steve Stanley got to mill the gravy train tree! A massive behemoth, too wide for them to cut normally, so they had to get creative.

The tree was way too big to just cut up into logs, plus it was situated on a spur of the mountain with drop-offs on either side. It was too wide at the base for them to get their mill on, and it was on an extreme decline. They started at the top of the tree, where it was skinnier, and just started cutting straight down into it at the lengths needed. They cut out sections where their mill could fit and started skimming off the top. After a lot of hard, backbreaking work, the tree was milled into beautiful lumber! It was their most productive day yet!

Sadly, the new Magnum 880 chainsaw is out of commission for the rest of the trip as a part snapped, which means they are using their less reliable, used and abused Magnum as their main saw. There is a spare part back in town, but they have no way to get it to them. They also broke another chain tensioner, which leaves them with only one more remaining.

However an encouragement is that the hill that needed to be removed to make a helicopter pad is now gone!

On day ten Rhett was standing on the rest of the big tree trying to remove a lobe before milling could begin, when it leapt down the mountain with such enthusiasm that the previously immobile lobe decided to come along with them. This is what Rhett shares about what happened next;

“I, for one, did not want to go down the mountain. I had managed to scramble off the log, but rather than finding a firm footing, I only managed to get onto the lobe. At that point I was resigned to riding a two ton toboggan as it clunked along with its many, many more ton log alongside. I may have lost control, but of course God hadn’t! My toboggan might have flipped on me, or I might have gotten an arm caught between it and the log, but none of that happened. After only about 15 yards the log got tangled with another and my ride crashed into it, bringing us all to a safe stop!”

Thank the Lord that Rhett does not even have any bruises to show for it. God was looking out for him. Also thank Him for the beautiful weather they have been having the past few days and for the progress made.