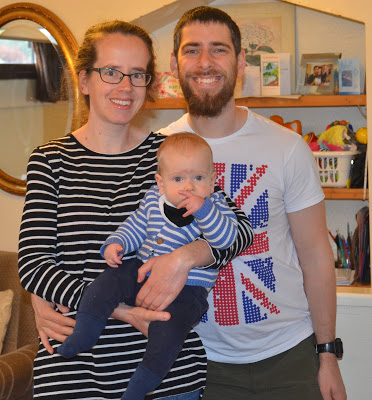 Steve and Gerdine Stanley are expecting their second baby due in April 2021. They are excited for Oscar to be getting a baby brother or sister, and it is going to mean a trip home so that their family can meet the new baby and to see how much Oscar has grown! For the Kovol people pregnancy is a taboo subject. Miscarriages and infant mortality account for about 50% of pregnancies (based on studying family trees).

Poor Gerdine, as if living in the jungle, caring for a toddler and learning an unwritten tribal language were not hard enough, now she has to do all that through the tiredness and nausea of pregnancy. The nice thing is that Steve can step in to take Oscar whenever needed. They aim to get their work hours in but are not afraid to take it a little easier when necessary.

They plan to leave PNG for the UK in February, heading to the Netherlands in August and back to PNG in September/October. However planning does not always go so well due to Covid. Moving their lives from the tropical Pacific to Europe is disorientating. They would like to rent a two-bedroom place starting in February to base themselves in Steve’s hometown while in England.

They are attempting to arrange their time in Europe while also trying to make the most of the time they have left in PNG. In the first couple of months in the UK they hope to contribute to the team by starting the grammatical write up and suggesting a preliminary alphabet while the language is fresh in their minds.

In six weeks they head to Goroka for an ultrasound (and a two-week break as a team), and then it will be six more weeks of language study time before leaving for the UK. Before they go, they will have their second language check and are aiming to reach progressing low (level 4 out of 9 on the language learning scale).

Steve and Gerdine think they are making steady progress. They are certainly trying to say more month by month. As they learn the language around more events, they are starting to see the same vocabulary repeated over and over. They have learned a good bit of the basic verbs and phrases. The next step is to start linking these simple sentences together, and turning the simple sentences that they know into questions, commands, conditional clauses and other types of speech. There is a long road ahead of them!

The Hansen family will be on their own in the bush for three or four months continuing with language study, until the Stous family return from the USA. The Stous’ will be starting language study with the Hansens a year ahead of them; which is sure to be a challenge for them.

Steve and Gerdine thank you for continuing to pray for them. Pray that they would all stay healthy, and would not push themselves too far, but also that they would make the most of the short time they have here before heading home.