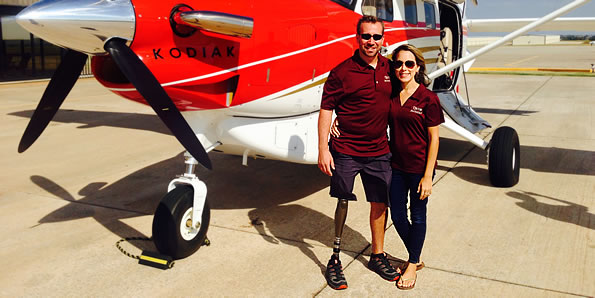 A long journey had begun. And questions about Jon’s future lingered. Would he ever fly again? Could he fly again? What does it take for an amputee to fly? And what would it take to get back to Papua New Guinea as a missionary pilot?
As his physical body healed, Jon and Adie began taking steps to make their past their future — to get Jon back in the pilot’s seat. They ask that you pray for three significant events on their horizon.
On 21st October, Jon has a check ride to demonstrate his ability to fly with his prosthetic. “He’s already passed the medical side, now he needs the flight portion done,” wrote Adie, Jon’s wife. “He will have three check rides — one for each aircraft he is licensed in.”
On 3rd November, Jon will have surgery on his foot to remove the foot plate. “During the accident,” Adie wrote, “Jon had a badly broken foot that needed repair, so a metal plate and screw were put in his foot.”
“Next, he would need a check ride with NTM Aviation to be checked out for flying overseas,” Adie wrote. “Lord willing, that will take place in December.”