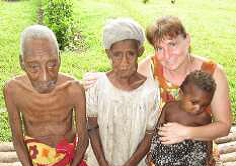 The support team at Hoskins are studying the first letter of Peter, and even in the opening verses they read that we have great reason to rejoice (Be joyful). Our focus in our daily lives determines our day by day decisions and whether we can experience this great joy.
As part of her role, Ineke purchases and packs supplies for fellow missionaries in the remote tribal areas. This is not as easy as it may sound. Finding the things on the shopping list in a PNG town, where it is far from certain that you are able to find what you are looking for can take several trips. The stores do not have internet sites where you can check their stock, and if you would try to call them there is a huge chance that the phone will be answered by a Chinese person who does not speak Tok Pisin or English. (Or anything that sounds like it!)
Last week Ineke had one helicopter flight on the schedule. A family, living and working in a remote village in rugged territory, needed supplies before rainy season in their area started. During the three months of rainy season, it would not be safe for the helicopter to try to land there, so it was “now” or not for a long time.
Ineke was tremendously encouraged to see how much on the list she was eventually able to pack. But the total weight was the next challenge. For supply and flight coordination Ineke now has a neat little Excel sheet programme to calculate how much fuel is needed, how many kgs can be taken and how much the flight would cost. Well, when you see those figures, you will automatically slowdown in your consumption and buying pattern.
Because this family desperately needed a new battery and some other sorely needed heavy weights, there were clearly way too many kgs. Ineke suggested that perhaps a second helicopter shuttle was needed but this would cost the missionaries almost £700 and that was just “a little” over their budget. So they had to make decisions on what to fly in and what to leave behind.
However the Lord allowed Ineke to witness the love and sharing for God’s work by the team on the support centre. A dear couple of co-workers jumped in and filled this need.
After the first shuttle, the missionaries in the tribe were busy changing the dying battery and were unpacking their supplies, storing away their frozen goods and eagerly opening their mail.
It was a complete surprise for them to hear the sound of the chopper approaching their village again the next morning. As you can imagine, the excitement, the surprise and gratefulness on their faces was worth a million pounds. Do you know what missionaries living in a remote village like that do when colleagues/ friends land a helicopter in their back yard? They talk and catch up in their own language. It was just awesome. It gave Ineke great joy, and she was merely watching.
After almost two months, the support team will say farewell to the sweetest little Papua family you could meet. They are following the Lord’s call for them to move to New Ireland to live there and support and encourage the young church in the Madak language group. The team were able to host them over the past months and bless them with the things God entrusted unto them. Pray for this family as they settle and minister.
Ineke praises the Lord for God’s perfect plans and that we are allowed to work together and are able to rejoice in the unfading/unfailing inheritance that He has prepared for us. Ineke asks for prayer that she would know God’s wisdom every day, be close to Him and choose those things which are of eternal value. Pray for Ineke in the practicalities of buying and packing for helicopter shuttles and for good health and all other things she needs to continue to work at the centre in Hoskins.