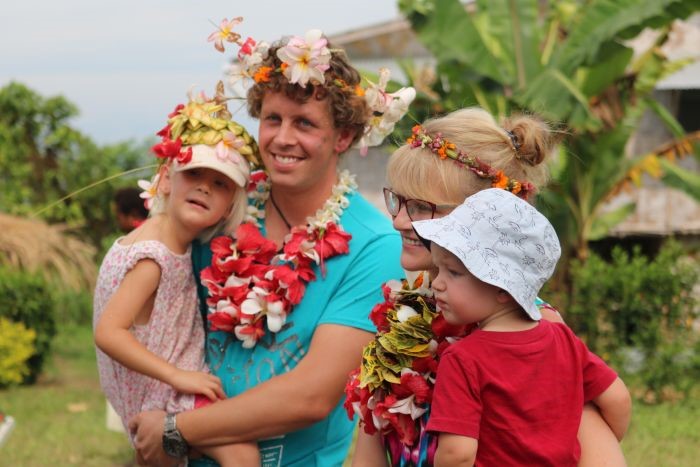 In their recent update, Christopher and Lilli Meyer with Linda and Silas were pleased to report that not only was their house built, but also they have been living in it for about three weeks already! They are so happy to have a home that is not just a home for a few short weeks.

They have recently returned from attending the annual conference for all NTM missionaries who work in the western region of PNG. They had a wonderful time with many other missionaries and felt blessed, encouraged and challenged.

Before they went to the conference, they went to the capital of PNG, Port Moresby. They renewed their passports and really enjoyed being in a more western-like environment! But after living in a big city like that for four days, they were ready to leave again!

Flying in and out of Kaje by helicopter can be adventurous in bad weather. Once they had to overnight in one of their neighbouring people groups with other NTM missionaries. Who knows how often something like this might come up in the years to come? Being flexible does not seem to be optional but required! It is so good to know who owns the universe and is in control of it every single minute and that the pilots take responsibility and make diligent choices!

At the beginning of February, Christopher and Lilli had a work-team visited from Germany arrive. They enjoyed showing them a glimpse of their lives in PNG. Six men helped to finish off the house including their three visitors from Germany. Christopher and Lilli do not have enough words to describe how thankful they are. The men installed the solar panels, put all the wires in, installed their water system, put up all the inside walls, put up the metal siding, built shelves, bed frames and a lot more.

Christopher and Lilli have now started full time culture and language learning. They got a head start when they were in Kaje for seven weeks at the end of last year, which was especially beneficial for their relationships with the people. They are striving to apply the same principles as they did when they learned Tok Pisin. They want to learn from the people in ‘real life situations,’ which means spending as much time as possible with them, learning from them. It is a ginormous task and Christopher and Lilli feel very incapable of fulfilling it… However, the good news is that they do not have to produce the strength to do it. God is so good and He is enough.

Thank you so much for being such a vital part of this work. They could not do this without prayer.