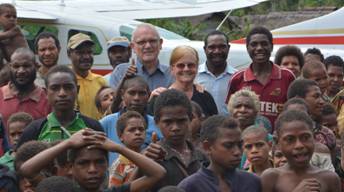 Thank the Lord for safety and for good flights and for fairly good health. The day Jack and Isa flew in to the tribe, they were praising the Lord for good flying weather as the Pawaians had had nothing but rain for three or four months. It was a gorgeous day! Friends greeted them and Jack and Isa tried to get settled right away. Everything had been locked up for a year so there was a lot of cleaning, sweeping, washing walls down for mould and washing every cup, saucer, pan, whatever. All of the bedding was put outside on the line to give it a good airing in the sun. The bedding had a strong smell of mould even though it had been kept dry. That is typical of things in a rain forest even though sealed in plastic in a metal drum!
The Pawaians started to arrive at the village. Some hiked three days or so to be with them. Jack and Isa started teaching daily from the Word and had around 150 adults and about 60 younger kids attending daily for four weeks. It wasn’t just Jack teaching either. There was a lot of feedback and thankfulness and appreciation from the people as they shared too. There were lots of good testimonies of God’s daily provision and His faithfulness and watch care over them. It was a joy for Jack and Isa to be with them! In the evenings, they printed up and made booklets of what Jack had taught so that the people would have something to read and something to teach others with when they were gone.
Jack and Isa thank the Lord for making it possible for them to get back to Papua New Guinea yet again which is an honour and a great privilege. They thank the Lord for what HE has done in the lives of the Pawaians, bringing them from darkness to light! The believers have a conference in the tribe starting from the 10th December. They love to get together and many hike for days through the jungle to get there. Pray for them to grow in their understanding of God’s Word.
In January, Jack and Isa plan to spend some time at North Cotes College as Jack will be teaching a group of new students for a few weeks. They find this time so encouraging. The students are the future generation of missionaries.