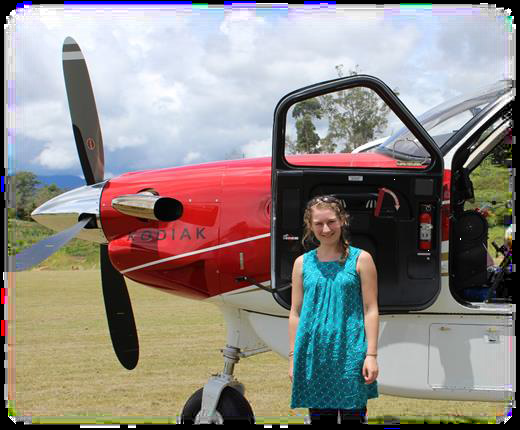 North Wahgi is located in the Highlands, a twenty-five minute trip by Kodiak plane. The area comprises of the valley to the north of the Wahgi River, and rises up into the highest mountain ridges, before dropping away into another tribal ‘tok plas’ language group. North Wahgi is a large language group of around 100,000 people, speaking a complex and difficult Highlands tribal language.
An NTM missionary team moved into the area by invitation of the people in 2007, to begin learning language and culture. After acquiring the language, literacy work began to teach the people to read and write in their previously unrecorded language. Translation of Bible lessons and portions of God’s word was also started, culminating with the chronological Gospel teaching. There is now a church, a body of believers in a section of the North Wahgi area. At this more advanced stage of tribal church planting Gemma was able to visit to spend time with the believers, villagers and missionary family the Hulleys.
Pray for the ongoing work in North Wahgi, that the Hulleys may know encouragement and the believers are strengthened.
As Gemma spent time with brothers and sisters in Christ and listened to their testimonies, she realised afresh how easy it is to get narrowly focused on her classroom arena. Easy to forget that her part is a building block in the foundation for the goal of seeing the Gospel proclaimed in the heart language of the un-reached.
Pray for strength and wisdom as Gemma teaches her final term. Also pray for children and young people that Gemma works work with that are facing transition, either for a year of home assignment, or to return to their passport country for further education.