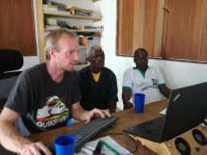 While Aaron and Amy Speitelsbach continue to labour on with the work among the Glarro people of Liberia, the overwhelming workload, slow progress, and the pressure of living life in the middle of a rural community, are more than challenging. It seems that they are constantly fighting discouragement and spiritual battles, which keep driving them back to seek and trust God.

If it were not for support through prayer, they would have given up by now.

In the midst of all the hardships, they have the certainty that, “At the end it will be worth it all!”

Their co-worker Guy finished his official language study and is now helping Aaron with making Bible lessons in the Glarro language. They take turns preparing a draft and then have a group of four local people help them get the drafts into somewhat decent Glarro. That becomes the base of the lesson. Currently they are working on drafting Bible lessons on the life of Jesus. However, there are also several Old Testament lessons as well that still need much editing and improving before they are finished. Their language helpers and Amy are helping them in this process of making the lessons sound more natural and as easy as possible to understand and follow.

They have set up and opened a little library of English kids’ books to a few children who have reached a level of basic reading skills. They are constantly checking out new books to read and ‘study’ at home. It is such an encouragement for Aaron and Amy to see some of those kids enjoying the ability to read, which is mostly due to Amy’s efforts.

Recently, the man that they got some barrels from to ship the books has donated four more barrels and Aaron and Amy are considering shipping another load of books and Bibles to Liberia.

Whilst, it is true Glarro is predominately spoken in their area, English is the national language and is ‘taught’ in the schools. They believe that having a greater range of reading material will help to raise the children’s education level dramatically. As it is now, someone from their village would have to travel a considerable distance just to even see ten books at once, if it were not for this library!

Besides teaching several kids’ reading classes at the local elementary school, Amy also has an adult literacy class, where she teaches them how to read and write in Glarro.

In another Glarro village, their co-worker Lesley continues with the Bible translation. She is currently working on Matthew and Romans. Aaron and Amy have the privilege of helping her with some parts of the translation process.

Due to Covid it has been a while since Aaron and Amy gave an update in person of what has happened, and is happening in the work. They recently booked tickets for home assignment in the USA from October until Christmas.

They would like to make as much progress as possible on the Bible lessons until they go on home assignment. They also want to be more intentional in their relationships with the people and not just engage in small talk; something that they have neglected lately due to their discouragement, but God recently brought this back into focus, and encouraged them to keep their lights burning.

– That they were able to attend the mission’s West Africa field conference, which God used to encourage them and help them to refocus.

– That His plans and His timing are best.

– That they are not alone in this country, and that there are other missionaries, even though they are few, seeking to bring people closer to Him.

– For the progress that has been made through Amy’s literacy efforts.

– That Aaron and Amy will seek strength in God, and not in their activities or distractions.

– For the small group who help with the Bible lessons, that His Word will challenge their thinking and their hearts.

– That God will prepare the Glarro for His message, as they get closer and closer to having enough lessons ready to start teaching them.

– For wisdom how to widen their literacy efforts and that people will be interested in learning, and teaching literacy.

– For their home assignment time, that they will use that time to serve His church wherever they go.

Thank you for being a part of their ministry among the Glarro people in Liberia, West Africa.